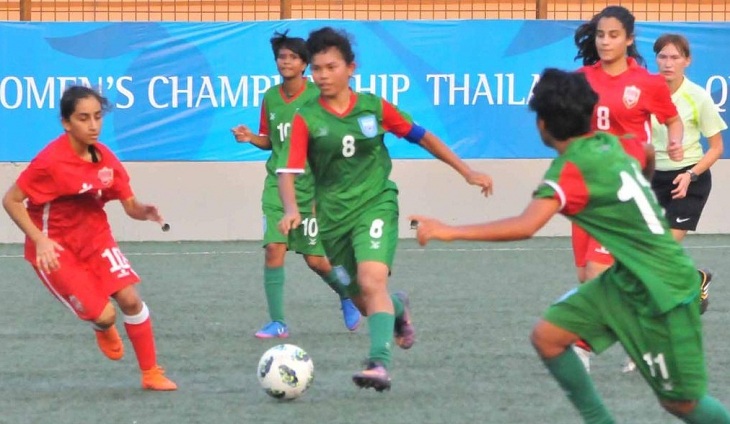 Bangladesh put in an organized performance to hand an emphatic 8-0 defeat to Lebanon in their Group F encounter of AFC U-16 Women’s Championship Qualifiers at Birshreshtha Shaheed Mostafa Kamal Stadium today.

Sajeda, Saraban Tahura and Shamsunnahar Jr struck a brace while Anai Mogini and substitute Rojina Akhter netted one goal each in the one-sided affair though a tough game was expected from Lebanon, who have age-group women’s football league.

Bangladesh, who handed a massive 10-0 defeat to Bahrain in their first match, struck five goals in the first half before adding three more goals in the second half amid scorching heat.

With two successive wins, the girls in red and green are on the top of group with six points, equal with Lebanon but Bangladesh have better goal difference while Vietnam with three points from one match are scheduled to play against winless United Arab Emirates (UAE) this afternoon.

Bangladesh will play their third match against UAE on Friday before playing the group final match against favourite Vietnam on September 23.