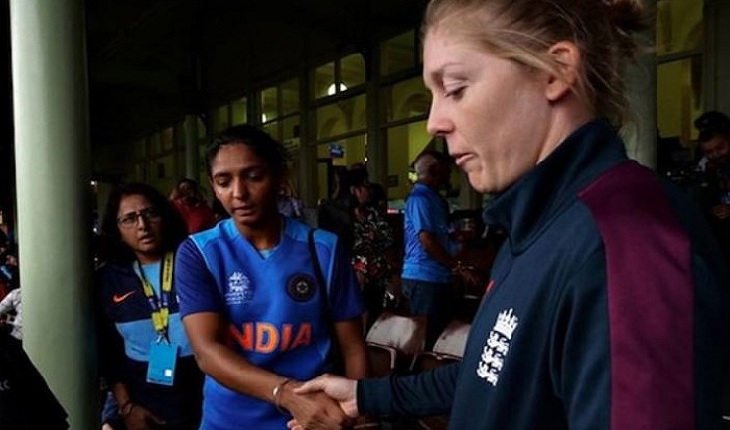 India reached a maiden women's Twenty20 World Cup final on Thursday after their last four clash against England was washed out, sparking calls for the International Cricket Council to include reserve days in future events.

Harmanpreet Kaur's unbeaten side were due to face the 2009 champions at the Sydney Cricket Ground, but the rain began pouring early in the day with barely any let-up.

With a minimum 10 overs per side needed for a result and no break in the weather, the umpires called it off without a ball being bowled. Normally, five overs per side are needed to constitute a Twenty20 match, but the rules are different for ICC tournaments.

Four-time champions Australia are scheduled to take on South Africa later in the second semi-final, with that match also under threat.

With no reserve day, the highest-ranked teams from the two groups move into the final if play is not possible.

That would pit India against South Africa at the Melbourne Cricket Ground on Sunday, where organisers are hoping to attract 90,000 plus fans, denying Australia a chance to defend their crown.

A reserve day is allowed for the final and the lack of one for the semis has been criticised by some players, with England captain Heather Knight among those calling for change.

"If both semi-finals are lost it would be a sad time for the tournament," she told reporters ahead of the match. "It's obviously going to be a shame if it does happen and I'm sure there will be a lot of pressure on the ICC to change that."

Cricket Australia chief Kevin Roberts said he sought clarification from the ICC about adding a reserve day with the Sydney weather looking ominous, but the request was denied.

"We've asked the question and it's not part of the playing conditions and we respect that," he told Melbourne's SEN radio.

"It gives you cause to reflect and think about how you might improve things in the future, but going into a tournament with a given set of playing conditions and rules, I don't think it's time to tinker with the rules."

It is not the way India would have wanted to make the final, but they are deserving of being there having gone through the group phase as the only unbeaten team.

After opening their campaign by upsetting Australia, they beat Bangladesh, New Zealand and then Sri Lanka.

While the entire team played well, teenage batting prodigy Shafali Verma excelled, which saw her elevated to the top of the ICC T20 batting rankings this week aged just 16.

She is only the second Indian after Mithali Raj to reach number one, pushing New Zealand veteran Suzie Bates down to second.

Ranked four in the world, India had made three semi-finals before this year and lost every time, including against England at the last World Cup.