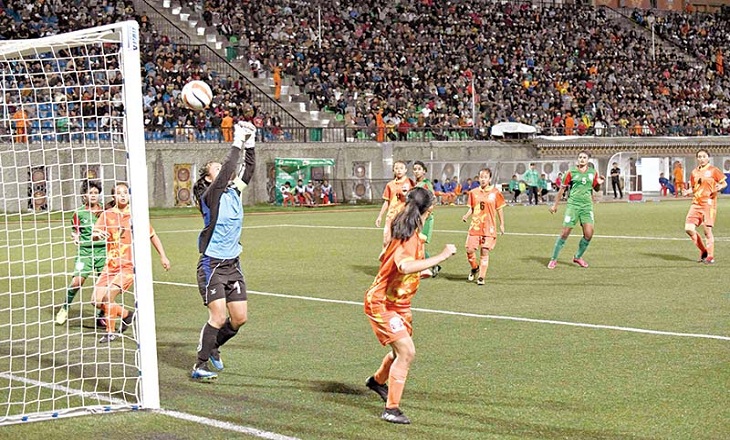 Defending champions Bangladesh smartly reached the final of the six-nation 2nd SAFF U-15 Women’s Championship eliminating hosts Bhutan by 5-0 goals in the 2nd semifinal at the Changlimithang Stadium in Thimphu on Thursday evening.

The winners clearly dominated the first half by 3-0 goals scored by Anai Mogini, Anuching Mogini and Tohura Khatun in 18th, 38th and 43rd minutes respectively.

Maria Manda and Shaheda Akhter Ripu scored two more goals in the 69th and 86th minute of the 2nd half to settle for the comfortable 5-0 goals victory.

Bangladesh will play the final on Saturday at 7 pm Bangladesh time against their traditional rival India, who eliminated Himalayan country Nepal by 2-1 goals in the first semifinal at the same venue on Thursday afternoon.

The 3rd place-deciding match between two losing semifinalists Nepal and Bhutan will also be held on Saturday at 4 pm at the same venue.

Earlier, Bangladesh U-15 Women's team emerged Group B champions with all-win record to reach the semifinals beating Nepal by 3-0 goals in their last group affairs at the same venue last Monday after crushing Pakistan by massive 14-0 goals in the opening match.

Bangladesh have so far scored 22 goals in the tournament conceding no goal. They did not also concede any goal in the first edition of the meet last year.

Last-time runners-up India also reached the semifinals as Group A champions with all-win record crushing Sri Lanka by 12-0 goals in the opening match and defeating hosts Bhutan by 1-0 goal in the 2nd match.

Lynda Kom (31') and Kritina Devi (58') scored goals for India one in each half while Rajani Thokar scored the lone goal for Nepal in the 37th minute.

India could have made it 3-1 in the 66th minute but Silky's shot was saved by the opponent's goalkeeper. The move was initiated by Munda's burst through the Nepalese midfield.

Nepal tried to attack in numbers in the last few minutes but it was a little too late with the Indians already shutting shop by then.