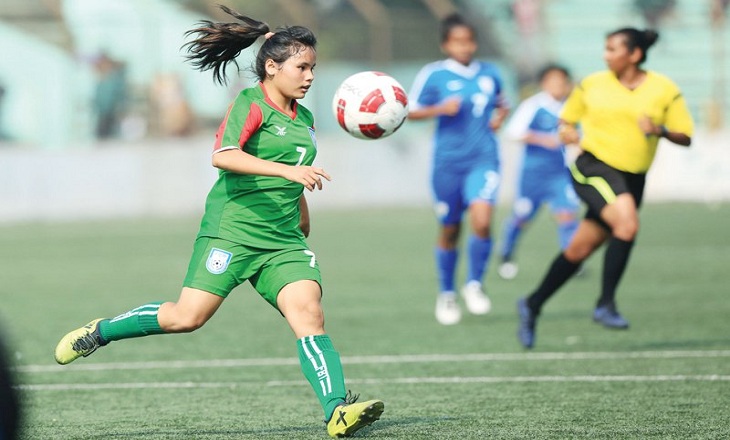 In a quest to keep their supremacy in the subcontinent intact, holders Bangladesh will take on India in the final of the SAFF U-15 Women's Championship at Changlimithang Stadium in Thimphu, Bhutan tonight.

The match will start at 7:00pm (BST) after the third-place deciding match between hosts Bhutan and Nepal at the same venue at 4:00pm (BST).

The final between Bangladesh and India is a virtual rematch of last edition's final, when Bangladesh beat India 1-0 to win the trophy of the inaugural championship held in Dhaka.

Before the start of the six-team championship in Thimphu last week, Bangladesh entered the tournament as favourites, followed by neighbours India, so it was expected that the two countries would contest the final of the prestigious regional meet.

Bangladesh, however, are far ahead of India in terms of victories in age-level competitions. Since a narrow 1-2 defeat to India during the 2014 AFC U-16 Women's Championship Qualifiers in Dhaka, the girls in red and green have not lost to India in any age-level competition. The Bangladesh U-14 girls played a 1-1 draw against India in 2015 but have beaten them twice in 2016 during the AFC U-14 Girls' Regional (Central and South) Championships while the Bangladesh U-15 women's team beat India twice in 2017 during the SAFF U-15 Women's Championship in Dhaka.