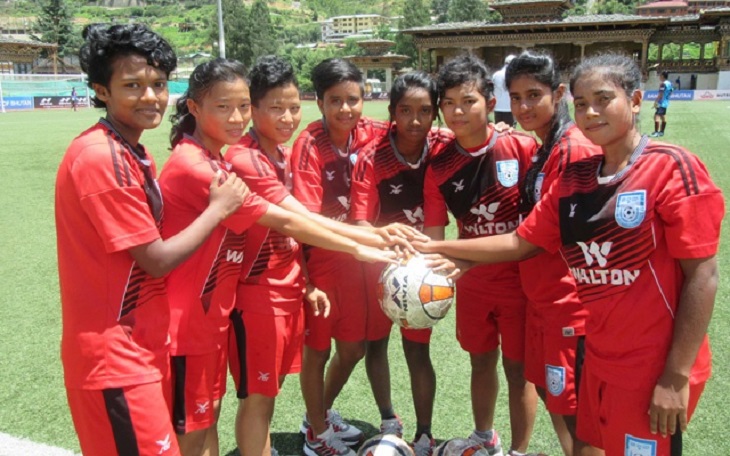 Defending champions Bangladesh put up a below-par performance in the final of the SAFF U-15 Women's Championship as they suffered a 1-0 defeat to India at the Changlimithang Stadium in Thimphu yesterday.

The defeat meant that the girls in red and green lost their stranglehold on the region's football to neighbouring India, who avenged their 1-0 defeat to Bangladesh in last edition's final in Dhaka last December.

The victory also saw India stop their losing streak to Bangladesh, who defeated the Indian U-14 and U-15 teams twice each in 2016 and 2017. Meanwhile, the Bangladesh girls lost their regional supremacy three years after clinching the AFC U-14 Girls' Regional Championship in 2015, which they followed up by retaining the title in 2016 and winning the inaugural Defending champions Bangladesh put up a below-par performance in the final of the SAFF U-15 Women's Championship as they suffered a 1-0 defeat to India at the Changlimithang Stadium in Thimphu yesterday. in 2017.

Sunita Munda separated the sides with a 66th-minute strike, side-volleying a cross over Bangladeshi goalkeeper Mahmuda Akther. It was the first time Mahmuda had conceded in this tournament.

Bangladesh had displayed vibrant performances in the group stages and semifinal, but were not up to their usual imperious standards in the final. Luck also eluded them as Monica Chakma rattled the crossbar while striker Saraban Tahura headed wide with the goal gaping in the second half's stoppage time, spurning a chance to take the match any further.

Golam Rabbani Choton kept faith with the same squad that had notched a commanding 5-0 win over Bhutan in the semis in an attempt to pick up where they left off, but the girls seemed exhausted and struggled to replicate their previous performances.

The Bangladesh girls were clearly overwhelmed by the pressure of the occasion soon after they survived a scare in the fourth minute, when Avika Singh rattled the crossbar from a free-kick before goalkeeper Mahmuda thwarted a Shilky Davi drive at the cost of corner in the same moment.

Afterwards, Bangladesh looked nervous throughout the first half and played without purpose as Maria Manda and Monica Chakma failed to control the midfield in the face of a high press from the Indian girls, whose press also meant Bangladesh could not build up the game from behind.

Avika and Jhanvi Shetty pestered Bangladesh and did not allow them to build from the back and the midfield was also in disarray as Monika and Maria were tightly marked. Defenders Akhi Khatun, Nazma Khatun and Nillufar Yesmin looked shaky, miscuing a plethora of clearances and passes.

The coaches had said that the girls had improved mostly in regards to fitness but they could not contend with the well-built Indians, who outmuscled their opponents during tussles. The eventual champions were also clearly ahead of Bangladesh in terms of running, chasing, passing and defending.

Although the Indian girls had struggled against Nepal and Bhutan, yesterday they were in full flow against the Bangladeshi girls, who seemed to have forgotten how to play football. The defeat in the final will certainly give Bangladesh some food for thought ahead of September's AFC U-16 Women's Championship Qualifiers in Dhaka.