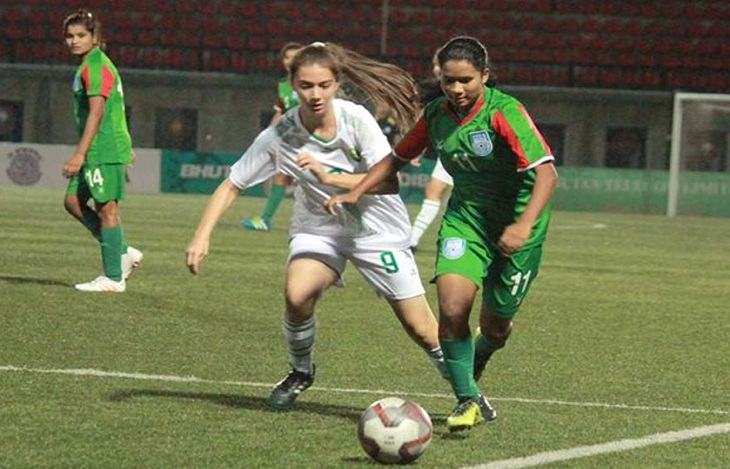 Bangladesh U-18 Women’s team smartly reached the semifinal of the maiden SAFF U-18 Women’s Championship from Group B crushing Pakistan by 17-0 goals in their first appearance at the Changlimithang Stadium in Thimphu, Bhutan on Sunday evening.

They led the first half by 8-0 goals.

Besides, captain Mishrat Jahan Mousumi, Akhi Khatun and Krishna Rani Sarker and Tohura Khatun netted one goal each for Bangladesh in the 37th, 58th, 74th and 87th minutes respectively.

With the day’s well merited victory, Bangladesh Women’s not only booked a seat for the semifinal from three-team Group B securing full three points with one match to spare against Nepal on Tuesday, but also improved the record of Bangladesh U-15 Women’s team’s 14-0 goals victory against Pakistan in the SAFF U-15 Championship in Bhutan last August.

In the day’s Group A match, hosts Bhutan outplayed the Maldives by 13-0 goals at the same venue on Sunday.

Earlier in the Group matches last Friday, Nepal made a flying start crushing Pakistan by massive 12-0 goals while India also made a good start beating hosts Bhutan 4-0 on the opening day on the same venue.