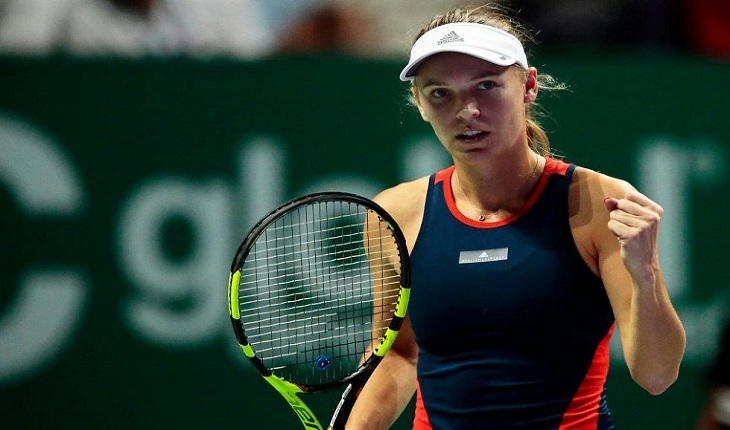 Caroline Wozniacki was diagnosed with rheumatoid arthritis before the U.S. Open, the Danish tennis player revealed at the WTA Finals on Thursday.

She made the announcement after being eliminated from the year-end competition following a 5-7, 7-5, 6-3 loss to Elina Svitolina in her third round-robin match.

"It turns out that I have an autoimmune disease, rheumatoid arthritis, which goes in and attacks your joints," she said. "When the body has a lot of fluids in it and you swell up, you get tired, you get exhausted, all these things.

"In the beginning, it was a shock. You feel like you're the fittest athlete out there. That's what I'm known for, and all of a sudden you have this to work with."

The 28-year-old Wozniacki won her first Grand Slam title at the 2018 Australian Open. She briefly recaptured the No. 1 ranking after a six-year wait.

After Wimbledon in July, she thought she had the flu while on vacation. Her legs hurt when she started playing again. In August in Montreal, she woke up one morning and couldn't lift her arms above her head.

Wozniacki thought she may have glandular fever, but the doctor said she was fine. However, she was certain something was wrong and went for more in-depth testing.

She won her third title of the year in Beijing three weeks ago. She said it was initially important to keep the diagnosis a secret.

"I didn't want to talk about it, obviously, during the year because I didn't want to give anyone the edge or thinking that I'm not feeling well," she said. "You learn how to just cope after matches.

"Some days you wake up and you can't get out of bed, and you just have to know that's how it is, but other days you're fine. You don't even feel like you have it. I didn't want to look it up, I didn't want to Google it, because if you Google stuff you feel like you're going to die," Wozniacki added with a smile.

After the U.S. Open in September, she decided to do more research on rheumatoid arthritis and her doctor said much progress had been made in managing the disease.

"You just have to be positive and work with it, and there are ways you can feel better, so that's great," Wozniacki said. "It's, obviously, not ideal for anybody. I think when you're a professional athlete, it's even more not ideal.

"But at the end of the day, you find a plan, figure out what to do, do your research, and thankfully there are great things now that you can do about it. I'm very proud of how I have been so positive through it all and just kind of tried to not let that hinder me."

Williams rebounds from worst loss to advance in Cincy tennis