Serena proves too strong for Sharapova 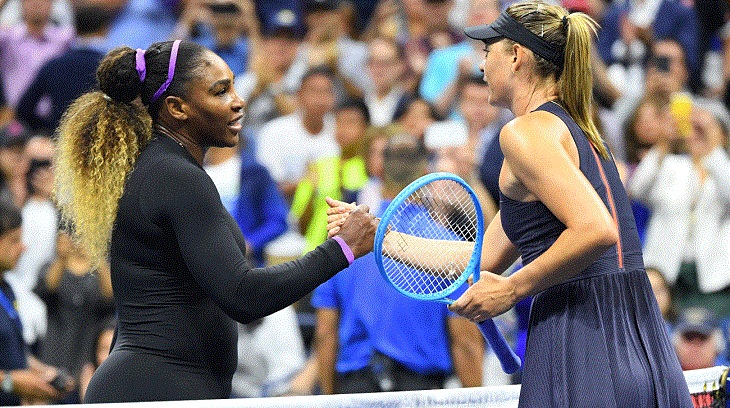 Serena Williams delivered one of her most complete performances since returning to the game after the birth of her daughter to rout a helpless Maria Sharapova in the first round of the U.S. Open on Monday.

The ruthless American needed less than an hour to defeat Sharapova 6-1, 6-1 and notch her 19th consecutive win over the Russian in what some charitably dub a "rivalry."

Williams, seeded eighth, has her sights set on a record-tying 24th Grand Slam title after coming up short in the final of last year's U.S. Open and the last two Wimbledon finals.

The biggest question for Williams, who returned to the sport after overcoming life-threatening medical complications related to the birth of her daughter in 2017, was whether she was physically up for the challenge of the U.S. Open.

Back spasms forced her to withdrew from the Rogers Cup final in Toronto earlier this month and skip the Cincinnati Masters but she put those doubts to rest with a brilliant performance under the lights on Arthur Ashe Stadium.

"The body is good, I feel good. My back is a lot better. So I'm excited, this is going to be fun," she said.

She credited her form to "super intense" practices with coach Patrick Mouratoglou but said she benefits just as much from spending time with her daughter.

"I play with my baby, I'm obsessed with my daughter," she said.

"We were at the fair the other day so maybe we'll go back. But that's what I do to relax. I come out here and I have such a great opportunity to play this sport in front of you guys and then I feel even more blessed to come home to my family."

"Yeah, I don't know who that is," she told a reporter who asked how she felt about the USTA deciding not to have him umpire her matches this year.

Next up for Williams is a second-round meeting with American teenager Caty McNally on Wednesday.

Serena vs. Sharapova set for prime time on Day 1 of US Open

Serena matches her easiest win over Venus in US Open rout