Serena vs. Sharapova set for prime time on Day 1 of US Open 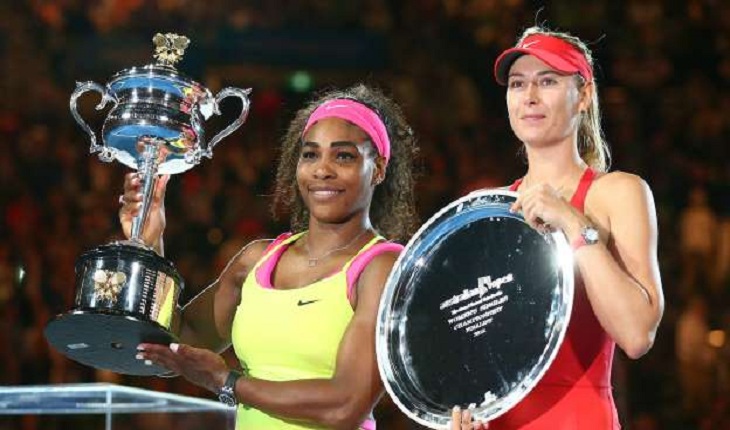 Serena Williams vs. Maria Sharapova is, not surprisingly, getting primetime billing at the US Open.

The two tennis stars' 22nd career meeting and first at Flushing Meadows will be the opening act in Arthur Ashe Stadium for the night session on Monday as the year's last Grand Slam tournament gets started.

"Of course I'm going to watch it. I know you all are going to watch it. I think everyone in New York is going to watch it," defending champion and No. 1 seed Naomi Osaka said Friday. "Yeah, I mean, for me, I'm not that surprised that that happened, because, like, at every Grand Slam, there is always some sort of drama. You know what I mean? Like a first round. Like, 'Oh, my God!'"

The U.S. Tennis Association announced the show-court schedules for both Day 1 and Day 2.

That includes 15-year-old Coco Gauff in action at Louis Armstrong Stadium on Tuesday.

The first match in the main stadium Monday will be French Open champion Ash Barty against Zarina Diyas, followed by defending men's champion and No. 1 seed Novak Djokovic against Roberto Carballes Baena.

Then at night, Williams-Sharapova will be followed by 20-time Grand Slam champion Roger Federer against qualifier Sumit Nagal.

Williams owns 23 major singles trophies, while Sharapova has five. Both have been ranked No. 1. They've met at every other major tournament at least once, including in a final at each, but never before at the U.S. Open. Williams has won 18 matches in a row against Sharapova, and leads their overall series 19-2.

In addition to Gauff's first-round match against Anastasia Potapova, Day 2 in Armstrong will include two-time major champion Simona Halep and Australian Open semifinalist Stefanos Tsitsipas in the afternoon, along with two-time Australian Open champion Victoria Azarenka and the combustible Nick Kyrgios against American Steve Johnson at night.

In an effort to avoid the sort of confusion that reigned over last year's U.S. Open final between Serena Williams and Naomi Osaka, the U.S. Tennis Association wants to make the sport's rules and chair umpires' rulings clearer to on-site spectators and TV viewers.

So when a player is warned by an official about a code violation getting coaching during a match, say, or destroying a racket that will be displayed on the scoreboard.

"It's not a constant marker there," U.S. Open chief umpire Jake Garner said Friday. "It's just when the violation occurs, it will show up on the board at the moment it's given."

The USTA decided against allowing match officials speak to the media after a contest involving controversy or questions, but Garner or tournament referee Soeren Friemel both are new appointees might be made available.

Two other rules tweaks this year: The excessive heat rule will allow for 10-minute breaks for all men's or women's matches, whether or not they already were in progress when the weather reached a point of being dangerous to players; women can now only have one bathroom or change-of-clothing break per three-set match, not two.

Host Japan might not get to field its dream mixed doubles team for tennis at the next year's Summer Olympics.

That's because Kei Nishikori thinks playing with Naomi Osaka might just be too much tennis in Tokyo.

The 2014 U.S. Open runner-up is planning to play singles and men's doubles at the 2020 Games and for now isn't thinking about adding mixed doubles to his plans.

"Very hot, very humid, playing singles and two doubles I don't know if I can," Nishikori said at Flushing Meadows on Friday.

A Nishikori-Osaka duo not only would be expected to contend for a medal in Tokyo it would be among the most popular pairings in Olympic tennis history.

Osaka, who moved from Japan to the United States when she was 3, is the No. 1 ranked women's player and the reigning champion at both the U.S. Open and Australian Open.

Nishikori, who also left Japan to live in the United States, is No. 7 in the current ATP rankings. At last year's U.S. Open, he and Osaka became the first Japanese male and female players to reach the semifinals of the same Grand Slam tournament.

They're also friends who have played video games together.

But what about Olympic tennis together?

"I haven't thought too much yet, honestly," Nishikori said. "I don't know. I will talk to Naomi later."