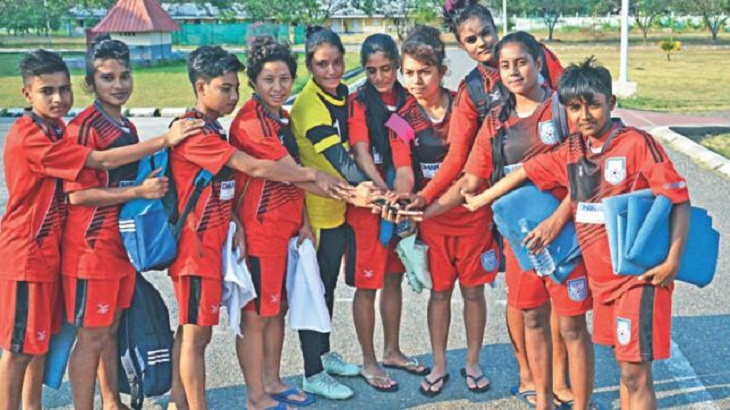 Bangladesh players show their resolve and team spirit after a practice session in Mandalay, Myanmar yesterday ahead of today's AFC U-16 Championship opener against Philippines.

Bangladesh moved into the final round of the AFC U-16 Women’s Championship after ensuring top-two finish from Group B as they handed a 1-0 defeat to hosts Myanmar in a Qualification Round-2 encounter at Mandala Thiri Stadium today.

Following their massive 10-0 win over Philippines, they only needed one win in either the match against Myanmar or China, to secure a semifinal spot as well as a place in the eight-team final round.

Midfielder Monika Chakma made the difference in the 68th minute with a curling corner kick from the left side. Although the Myanmar goalkeeper managed get her hand on the ball she was unable to palm it to safety as Bangladesh scored. The result saw the girls in red and green confirm their back-to-back finals berth in the championship.

Bangladesh will now play their final group match against China on March 3. Four semifinalists will qualify for the eight-team final round to be held in Thailand.