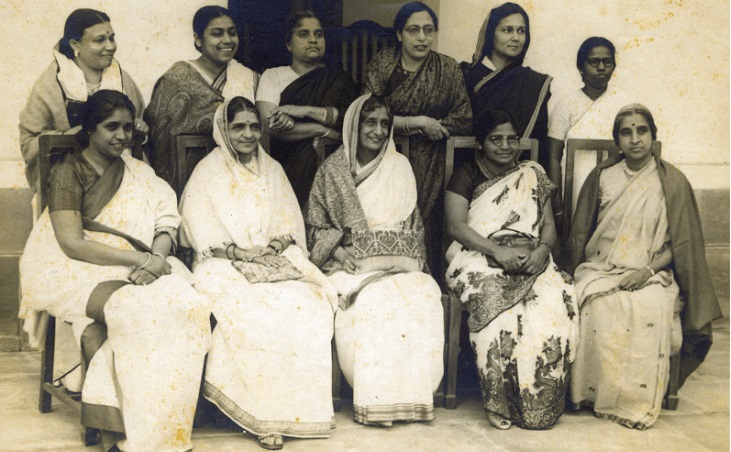 Ammu Swaminathan was born into an upper caste Hindu family in Anakkara of Palghat district, Kerala. She formed the Women’s India Association in 1917 in Madras, along with Annie Besant, Margaret Cousins, Malathi Patwardhan, Mrs Dadabhoy and Mrs Ambujammal. She became a part of the Constituent Assembly from the Madras Constituency in 1946.

In a speech during the discussion on the motion by Dr B R Ambedkar to pass the draft Constitution on November 24, 1949, an optimistic and confident Ammu said, “People outside have been saying that India did not give equal rights to her women. Now we can say that when the Indian people themselves framed their Constitution they have given rights to women equal with every other citizen of the country.”

She was elected to the Lok Sabha in 1952 and Rajya Sabha in 1954.  In 1959, an avid film buff, Ammu became the Vice President of the Federation of Film Societies with Satyajit Ray as President. She also presided over the Bharat Scouts and Guides (1960-65) and the Censor Board.

Dakshayani Velayudhan was born on July 4, 1912, on the island of Bolgatty in Cochin. She was the leader of the (then titled) Depressed Classes. Belonging to the Pulaya community who were severely discriminated against, she was among the first generation of people to be educated from the community and the first woman to wear an upper cloth.

Born into the princely family of Malerkotla, she was married to the young landowner  Nawaab Aizaz Rasul. She was the only Muslim woman member of the Constituent Assembly. With the enactment of the Government of India Act 1935, Begum and her husband joined the Muslim League and entered electoral politics. In the 1937 elections, she was elected to the U.P. Legislative Assembly.

In 1950, the Muslim League in India dissolved and Begum Aizaz Rasul joined Congress. She was elected to the Rajya Sabha in 1952 and was a member of the Uttar Pradesh Legislative Assembly from 1969 to 1990. Between, 1969 and 1971, she was the Minister for Social Welfare and Minorities. In 2000, she was awarded a Padma Bhushan for her contribution to social work.

Durgabai Deshmukh was born in Rajahmundry on 15 July 1909. At twelve years of age, she participated in the Non-Co-operation Movement and along with Andhra Kesari T. Prakasam, she participated in the Salt Satyagraha movement in Madras city in May 1930.  In 1936, she established the Andhra Mahila Sabha, which within a decade became a great institution of education and social welfare in the city of Madras.

She was also associated with the Andhra Educational Society, New Delhi. Durgabai was awarded the fourth Nehru Literary Award in 1971 for her outstanding contribution to the promotion of literacy in India. In 1975, she was awarded the Padma Vibhushan.

Born on July 3, 1897, to the Dewan of Baroda Manubhai Nandshankar Mehta, Hansa Mehta studied journalism and sociology in England. Along with being a reformer and social activist, she was also an educator and writer.

She wrote many books for children in Gujarati and also translated many English stories including the Gulliver’s Travels. She was elected to the Bombay Schools Committee in 1926 and became president of All India Women’s Conference in 1945–46.

In her presidential address at the All India Women’s Conference convention held in Hyderabad, she proposed a Charter of Women’s Rights. She held different posts in India from 1945 to 1960, such as the vice-chancellor of SNDT Women’s University, member of the All India Secondary Board of Education, president of Inter-University Board of India and vice-chancellor of Maharaja Sayajirao University of Baroda, among others.

6. Kamla Chaudhary
Kamla Chaudhary was born in an affluent family of Lucknow, however, it was still a struggle for her to continue her education. Moving away from her family’s loyalty to the imperial government, she joined the nationalists and was an active participant in the Civil Disobedience Movement launched by Gandhi in 1930.

She was vice-president of the All India Congress Committee in its fifty-fourth session and was elected as a member of the Lok Sabha in the late seventies. Chaudhary was also a celebrated fiction writer and her stories usually dealt with women’s inner worlds or the emergence of India as a modern nation.

Leela Roy was born in Goalpara, Assam in October 1900. Her father was a deputy magistrate and sympathised with the Nationalist Movement. She graduated from Bethune College in 1921 and became assistant secretary to the All Bengal Women’s Suffrage Committee and arranged meetings to demand women’s rights.

In 1923, with her friends, she founded the Dipali Sangha and established schools which became centres of political discussion in which noted leaders participated. Later, in 1926, the Chhatri Sangha, an association of women students in Dacca and Kolkata, was founded. She was instrumental in forming the Dacca Mahila Satyagraha Sangha, which played an active role in the anti-salt tax movement. She became the editor of a journal, Jayashree, which had the blessing of Rabindranath Tagore.

In 1937, she joined the Congress and in the next year, founded the Bengal Provincial Congress Women’s Organisation. She became a member of the women’s subcommittee formed by Subash Chandra Bose and when Bose went to jail in 1940, she was nominated the editor of the Forward Bloc Weekly.

Before leaving India, Netaji gave complete charge of party activities to Leela Roy and her husband. In 1947, she founded the Jatiya Mahila Sanghati, a women’s organisation in West Bengal. In 1960, she became the chairwoman of the new party formed with the merger of the Forward Bloc (Subhasist) and the Praja Socialist Party but was disappointed with its working.

She married Nabakrushna Choudhuri, who later became the Chief Minister of Odisha and shifted to Odisha in 1927. During the Salt Satyagraha, Malati Choudhury, accompanied by her husband joined the Indian National Congress and participated in the movement. They educated and communicated with the people to create a favourable environment for Satyagraha.

In 1933, she formed Utkal Congress Samajvadi Karmi Sangh along with her husband which later came to be known as the Orissa Provincial Branch of the All India Congress Socialist Party. In 1934, she joined Gandhiji in his famous “padayatra” in Orissa. She set up several organisations such as the Bajiraut Chhatravas for the upliftment of vulnerable communities in Odisha. She protested against the proclamation of Emergency by Indira Gandhi and was eventually imprisoned.

9. Purnima Banerjee
Purnima Banerjee was the secretary of the Indian National Congress committee in Allahabad, Uttar Pradesh. She was one among a radical network of women from Uttar Pradesh who stood at the forefront of the freedom movement in late 1930’s and 40’s.

She was arrested for her participation in the Satyagraha and Quit India Movement. One of the more striking aspects of Purnima Banerjee’s speeches in the Constituent Assembly was her steadfast commitment to a socialist ideology. As secretary for the city committee, she was responsible for engaging and organizing trade unions, kisan meetings and work towards greater rural engagement.

Amrit Kaur was born on 2 February 1889 in Lucknow, Uttar Pradesh. She was India’s first Health Minister and she held that post for ten years. Daughter of Harnam Singh, son of the erstwhile Maharaja of Kapurthala, she was educated at the Sherborne School for Girls in Dorset, England, but gave it all up to become Mahatma Gandhi’s secretary for 16 years.

She was the founder of All India Institute of Medical Sciences (AIIMS) and argued for its autonomy. She was a firm believer in women’s education, their participation in sports and their healthcare. She set up the Tuberculosis Association of India, the Central Leprosy and Research Institute, was vice chair of the board of governors of the League of Red Cross Societies and chair of the executive committee of St John’s Ambulance Society. When she died in 1964, The New York Times called her “a princess in her nation’s service”.

Renuka Ray was the daughter of Satish Chandra Mukherjee, an ICS officer, and Charulata Mukherjee, a social worker and member of the All India Women’s Conference (AIWC). As a young girl, Renuka lived for a while in London and completed her BA from the London School of Economics.

In 1934. as legal secretary of the AIWC, she submitted a document titled ‘Legal Disabilities of Women in India; A Plea for a Commission of Enquiry’. This articulated the AIWC’s disappointment with the treatment of the Sharda Bill and their commitment to the legal review of the situation of women before the law in India. Renuka argued for a uniform personal law code, saying that the position of Indian women was one of the most iniquitous in the world.

She was also President of the AIWC in 1952, served on the Planning Commission and on the governing body of Visva Bharati University in Shanti Niketan. She served as a Minister for Relief and Rehabilitation. She established the All Bengal Women’s Union and the Women’s Coordinating Council.

Sarojini Naidu was born on Feb 13, 1879, in Hyderabad, India. She was the first Indian woman to be president of the Indian National Congress and to be appointed as an Indian state governor. She is popularly called “the Nightingale of India”.

She studied at King’s College, London, and later at Girton College, Cambridge. After some experience in the suffragist campaign in England, she was drawn to India’s Congress movement and to Mahatma Gandhi’s Non-cooperation Movement. In 1924 she travelled to Africa in the interest of Indians there and toured North America, lecturing on the Congress movement, in 1928–29.
Back in India, her anti-British activity brought her a number of prison sentences (1930, 1932 and 1942–43). She accompanied Gandhi to London for the inconclusive second session of the Round Table Conference in 1931. Sarojini Naidu was also known for her literary prowess and in 1914 she was elected a fellow of the Royal Society of Literature.

Sucheta Kriplani was born in 1908 in present-day Haryana’s Ambala town. She is especially remembered for her role in the Quit India Movement of 1942. Kripalani also established the women’s wing of the Congress party in 1940.
Post-independence, Kripalani’s political stint included serving as an MP from New Delhi and then also as the Minister of Labour, Community Development and Industry in Uttar Pradesh’s state government. She took over as the chief minister of UP from Chandra Bhanu Gupta and occupied the top post till 1967. She was India’s first woman Chief Minister.

Pandit’s long career in politics officially began with her election to the Allahabad Municipal Board. In 1936, she was elected to the Assembly of the United Provinces, and in 1937 became minister of local self-government and public health—the first Indian woman ever to become a cabinet minister.

Like all Congress party officeholders, she resigned in 1939 to protest against the British government’s declaration that India was a participant in World War II. In September 1953,  she was appointed as the first woman and the first Asian to be elected president of the U.N. General Assembly.

For her political activism, she was imprisoned for various periods from 1939—47. Mascarene was elected to the First Lok Sabha in the Indian general election, 1951. She was the first woman MP from Kerala and one of only 10 elected to Parliament in those elections. Prior to her election to Parliament,  she had served briefly as Minister in Charge of Health and Power during 1949-1950.

Long history of nuns abused by priests in India