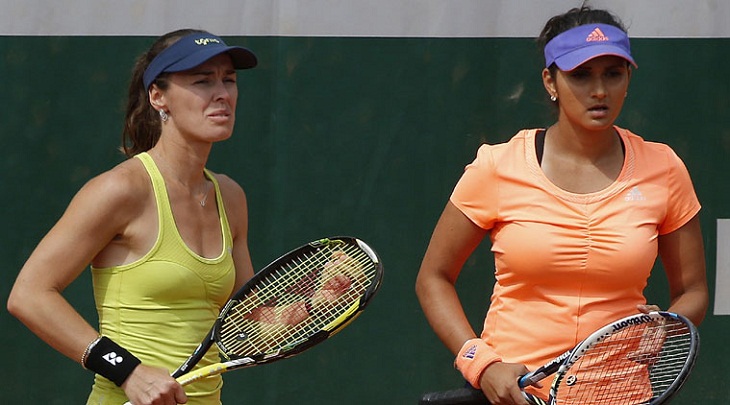 Martina Hingis and Sania Mirza lost their cool as their hopes of holding all four grand slam titles were dashed following a 6-3 6-2 defeat by Czech duo Barbora Krejcikova and Katerina Siniakova in the third round of the French Open on Sunday.

The Indo-Swiss team dubbed “Santina” was hoping to win four majors in a row after following up last year's Wimbledon and U.S. Open triumphs with victory in January's Australian Open.

But the top seeds appeared all at sea on a gloomy day at Roland Garros and their bid to complete the 'Santina Slam' ended after the Czechs blasted a service return winner to break Hingis in the final game.

Hingis and Mirza were left fuming at the umpire after a call went against them as they trailed 4-1 in the second set. Mirza tossed the ball in anger but the duo failed to win the argument, or the match, leaving Krejcikova and Siniakova to celebrate a memorable victory.

It proved to be a bad day for the big names in doubles as Venus and Serena Williams, who were the last women's team to hold all four majors in 2010, also perished in the third round, beaten 6-3 6-3 by the Dutch-Swedish pairing of Kiki Bertens and Johanna Larsson.