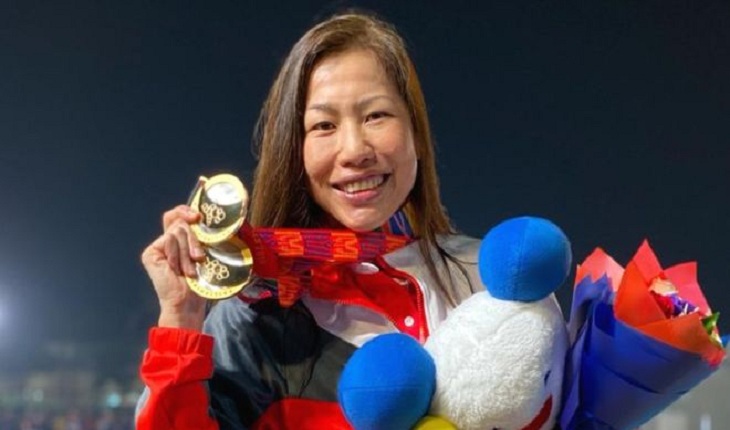 It's been a 38-year wait-but this week's hard work paid off for Christina Tham at the Philippines Southeast Asian (SEA) Games.

At the SEA Games-a national Olympic-style event-Tham first represented Singapore in 1981, winning silver in swimming at the age of 12.

She came back to the games at the age of 50, and finally went one level.
Tham won not one, but two underwater hockey gold medals-a sport that made its match debut.

"I never thought I was going to be back[ at] the SEA Games and win gold and targets," she said.

"I never thought I would be able to perform again at this stage."

Tham got into swimming at the age of seven when, during a family trip to Malaysia, her father had a near-miss while canoeing on a beach.

Her uncle, who was in his late 40s, was unable to swim and at first opposed wearing a life jacket-but relented on the urging of her mother.

"I recall when I heard a loud shrill in another canoe across the bay," Tham told the BBC. "I found my father floating on the water, pulling up the life vest. It saved his life." When her father was rescued, he immediately signed up for swimming lessons for the whole family-and since then Tham hasn't stopped swimming.

At the age of 12, at the 1981 SEA Games in Manila, she represented Singapore, winning her first silver in the 4x 100 m medley relay.

The SEA Games, held every two years, see the region's athletes compete in a variety of events.

"I was very young and did not know the value[ of my] success. I come from a traditional Singaporean Chinese community where[ you] are supposed to[ accept] modestly accomplishments," she says.

"It was only after I became an adult that I understood the enormity of my accomplishments-I was 12 years old and won a medal at the SEA Games and was in the[ national exams that year] top 10 percent in the world."

She was back at the SEA Games two years later, clinching another silver in the breaststroke of 200 m.

But that's where she stopped her journey as an athlete-for at least the next three decades or so.

Tham pursued a legal career, qualified as a lawyer, and ultimately headed her own division of a legal department within a real estate company.

It wasn't until 2005 that she revived her athletic life-and it ended with a newspaper story.

"I saw an[ underwater hockey] article that looked so interesting and intriguing,[ and I] went to try it out," she said.