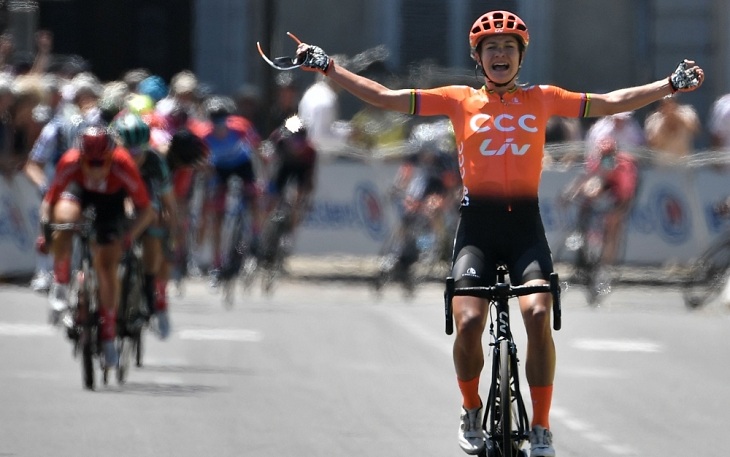 There is nothing bigger for male riders than victory at the Tour de France. It's the pinnacle of cycling. But there is no such prize for female riders.

Despite calls from cycling's governing body UCI for the creation of a women's Tour, organizers of cycling's marquee race have yet to come up with plans for an equivalent.

All they offer in July is a one day-race, La Course, that was held on the margins of the Tour de France on Friday in Pau and won by Dutch rider Marianne Vos.

Fresh from winning four stages at the 10-day Giro Rosa in Italy, Vos added another trophy to her large collection in the southwestern city of Pau, but victory in France did not taste the same.

"It was an incredible feeling to win four stages at the Giro, at the highest level," said Vos, a three-time world champion. "Here at La Course, it was really nice to show this form."

Tour organizers ASO have been holding the event since 2014 and say it's not possible for them to operate a longer race, for logistical and security reasons.

"We are not capable of organizing another event during the Tour," Tour director Christian Prudhomme told The Associated Press. "About 29,000 police forces are mobilized for three weeks. France has been struck by attacks, there were the yellow vests (protesters). It's impossible to have even just one extra security staff during the Tour."

To Prudhomme's credit, ASO has been showing interest in running women's equivalents of one-day classics Fleche Wallonne and Liege-Bastogne-Liege. The company also organizes a women's mini Tour of Yorkshire over two days.

"One day of racing is clearly not enough for women," Lappartient told the BBC. "If we want a women's Tour de France, we can (have it). For women's cycling we can continue to push."

A women's Tour de France was held during the 1980s alongside the men's race. Frenchwoman Jeannie Longo won it three times but the race never fueled real media interest.

Cycling enjoyed great success at the 2012 London Olympics. Vos was among a group of riders, including former time trial world champion Emma Pooley, which campaigned for the creation of a proper women's Tour. Their petition was called Le Tour Entier An Entire Tour and aimed at having women on the starting line of the 2014 Tour. Vos acknowledged Tour organizers' efforts in setting up La Course that year.

"For us it's one moment in the year, like the world championships, when the whole world is watching," Vos said. "Of course it's a big plus for women's cycling. We maybe need to change the calendar a bit and add more races, because you want the best teams in the best places in the world."