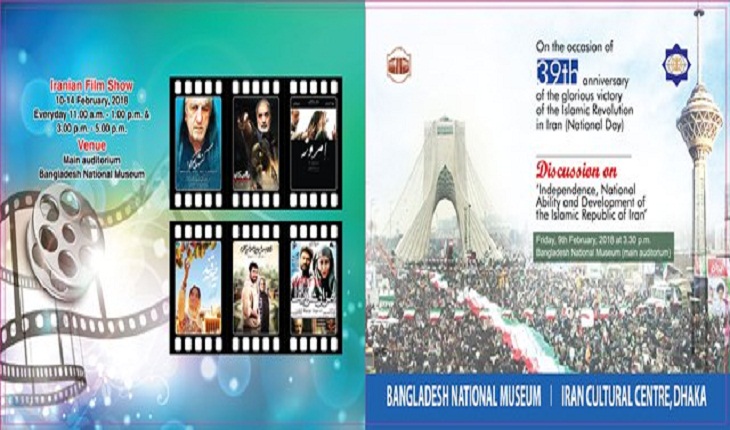 A six-day long Iran film show will begin on February 9 at the Bangladesh National Museum.

Iran Cultural Centre, Dhaka and Bangladesh National Museum will arrange the film show on the occasion of 39th anniversary of the Islamic Revolution in Iran (National Day).

The inauguration ceremony will be held at the main auditorium of the museum with the famous Iranian film ‘Body Guard’, directed by Ebrahim Hatamikia, as the opening screening.

The movie ‘Sweet Taste of Imagination’ by Kamal Tabrizi and produced by Mohammad-Ali Hossein-Nezhad, the domestic box-office hit and ‘Trik’ by Iraj Ghaderi, dubbed in Bangla, will be screened on February 10 while audience can enjoy ‘Fourth Child’ by Vabid Mosiayan and ‘Earthquake’ by Sairus Alvando dubbed in Bangla, on February 11.

‘Crazy Look’ by Abul Hasan Boudi and Kiumars Pourahmad's latest drama ‘Where is my shoes’  will be screened on February 12, while the screening of ‘A Cube of Sugar’ by Seyyed Reza Mir-Karimi and ‘Golchehreh’ by Vahid Shamsaei, will be held on February 13.

Two movies ‘Cling Up’ dubbed in Bangla by Golam Hossain and ‘Today’ by Seyyed Reza Mir-Karimi will be screened on the last day (February 14) of the film show.

The movies will be screened with English subtitles at 11 am and 3 pm respectively every day. The screening is free for all.