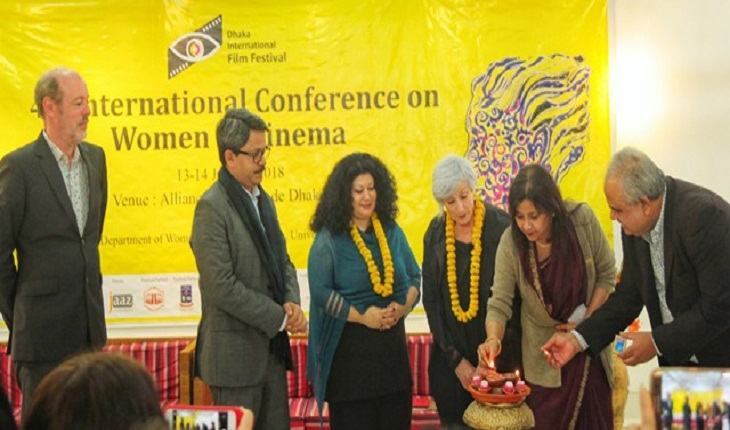 Describing cinema as a platform to raise voice for women's rights, State Minister for Information Tarana Halim on Saturday called for ensuring women's equal participation in filmmaking in the country.

She came up with the call while speaking at the inaugural ceremony of the 4th Dhaka International Conference on Women in Cinema organised by Rainbow Film Society in association with the Women and Gender Studies department of Dhaka University at Alliance Francaise de Dhaka in the capital.

"We put emphasis on women's participation in politics so that we can have their voices and their representation in parliament. But what’s about media? What’s about filmmaking?" she said.

Importance should be given to women's participation in producing films and special initiatives must be taken to this end, she added.

Noting that women have a better understanding of sufferings of their fellows, Tarana said, “We need a woman’s heart to understand the pain, sufferings, trauma and neglect a woman faces in the society and at her own home.”

Presiding over the inaugural session, State Minister of Foreign Affairs Shahriar Alam, also Chief Patron of Dhaka International Film Festival, said, “Cinema is the representation of our own life and society.”

To make a difference in the society, women need to raise their voices and work altogether.

Prominent actress Bipasha Hayat, attending the programme as an audience, told UNB that to change the social belief, changes should come from the roots, from the family.

Among others, Sydney Levine, a consultant of the film festival, Dr Sayed Saikh Imtiaz, Chair and Associate Professor of Women and Gender Studies department of Dhaka University, and M Bruno Plasse, director of Alliance Francaise de Dhaka, were present at the inaugural ceremony.

A total of six discussion sessions will be held on Saturday and Sunday covering various topics to improve the standard and content of women-based movies and create an interaction among the women who are involved in the medium of cinema through exchanging ideas and sharing diverse experiences.