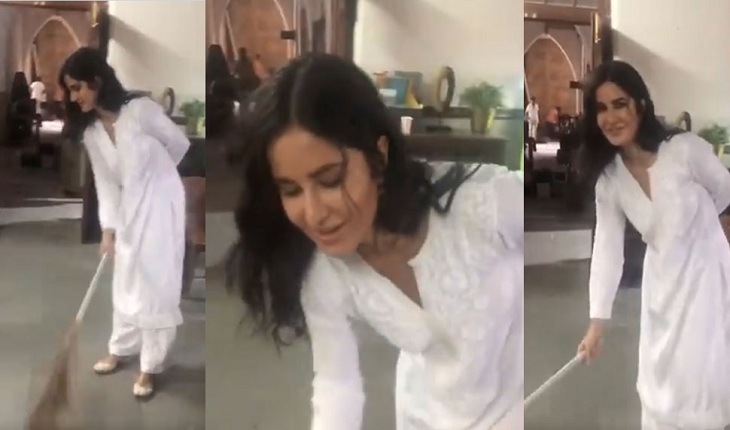 Katrina Kaif knows the importance of keeping one’s surroundings clean, whether it is at home or at work. In a new video shared by Akshay Kumar, the actor is seen sweeping floors on the sets of their upcoming film, Sooryavanshi.

“Arre Katrina Ji what are you doing?,” Akshay asks her in the video. Katrina is seen gently sweeping the floor while dressed in pristine white salwar kameez. Katrina approaches him with the broom and whacks him with it. “Spotted : The newest #SwachhBharat brand ambassador on the sets of #Sooryavanshi @katrinakaif #BTS,” Akshay captioned his post.

Katrina and Akshay’s fans loved seeing their off-screen camaraderie. “Jhadu waali baai ji,” wrote on fan. “Katrina mam is looking so amazing and awesome thank you for inspiring us to keep our work place clean,” wrote another. Other fans said they are eagerly waiting to watch them together on the big screen again. “Sooryavanshi can’t wait for movie to see you both together,” wrote one.

Sooryavanshi is directed by Rohit Shetty and is the third film in his cop universe of films, following Ajay Devgn’s Singham and Ranveer Singh’s Simmba--who will both be seen in the film. The director recently announced that Jackie Shroff will also have a special role in the film.

Katrina shared a picture recently with Rohit and Akshay, calling them the ‘best crew’. , “A perfect start to the year ....friends, laughs, smiles, onset ....... the best crew entire team, every day on set has been full of so much love and joy, just how films should be made .... see u in cinemas March 27th #sooryavanshi @itsrohitshetty @akshaykumar,” she wrote.

The shooting of the multi-starrer had begun in May and is set to hit the big screens on March 27th. The film will also feature a remake of the iconic 90s song Tip Tip Barsa Paani from Mohra.