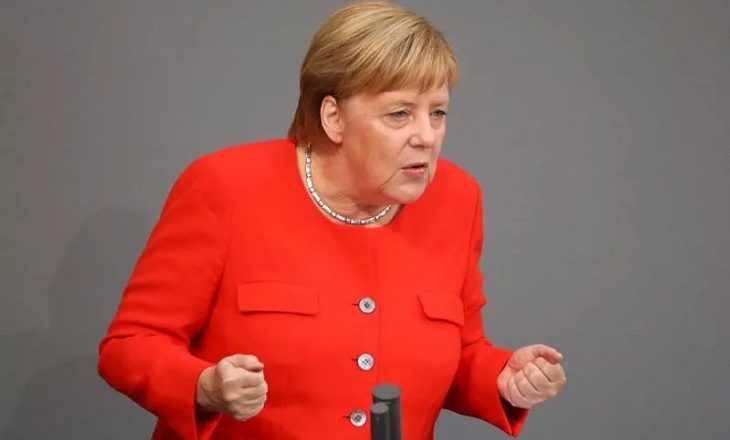 German Chancellor Angela Merkel condemned xenophobic attacks and the use of Nazi slogans in a robust speech to parliament on Wednesday after the most violent far-right demonstrations in decades exposed deep divisions in the country.

In an unusually rowdy session in the Bundestag (lower house) later, far-right Alternative for Germany (AfD) deputies stormed out of the chamber after a Social Democrat (SPD) accused them of being "unsavory" right-wing radicals.

Protests by right-wing militants in the eastern city of Chemnitz two weeks ago after the fatal stabbing of a German blamed on two migrants have reignited a fierce debate about Merkel's 2015 decision to let in more than a million refugees.

"There is no excuse or reason for hunting people down, using violence and Nazi slogans, showing hostility to people who look different, who have a Jewish restaurant, for attacks on police officers," Merkel told the Bundestag.

"We will not allow whole groups in our society to be quietly excluded," she said, adding that Jews, Muslims, Christians and atheists all belong in German society, and stressing that human dignity was paramount.

Before Merkel took the podium, the head of the AfD group in the Bundestag said Germany's "domestic peace" was at risk.

"As disgusting as Hitler salutes are, I would like to remind you that the really serious event in Chemnitz was the bloody deed (committed) by two asylum seekers," said Alexander Gauland.

He accused Merkel of spreading fake news about the protests and supported Hans-Georg Maassen, head of the BfV intelligence agency who is under fire for questioning whether video footage showing rightist gangs hounding migrants were real.

"The truth is, there was no hunting down of people in Chemnitz... The citizens who demonstrated were criminalised," said Gauland.

"Mrs Chancellor, you have nothing more to offer the people of this country than obstinacy, dogmatism and insults. Barricade yourself up in the chancellery away from reality!"

After Maassen took questions from a parliamentary committee behind closed doors about his comments on event in Chemnitz, Interior Minister Horst Seehofer said he saw no reason to dismiss the BfV chief.

But the SPD said that after examining a BfV report on the violence and hearing Maassen's defence of his disputed views that he should resign, saying it remained unconvinced he was the right person to lead the agency.

The centre-left SPD is the junior member of Merkel's conservative-led coalition.

The AfD, some of whose members joined right-wing militants in the Chemnitz marches, is the third biggest party in Germany. Its lawmakers' presence in parliament, which they entered after the 2017 election, has generated a more confrontational climate.

At that, all AfD deputies stood up and left the chamber. In a statement, the party said Kahrs had compared them to Nazis and described his insults as "unacceptable".

Earlier, former Social Democratic leader Martin Schulz also condemned the AfD, ending up by saying, "You belong on the dungheap of history," to loud applause.