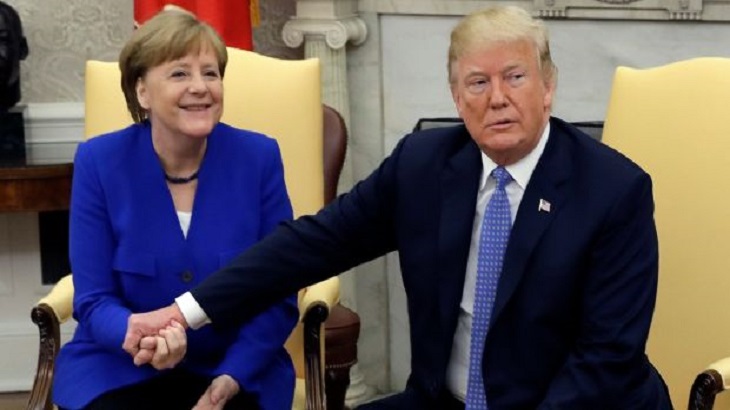 German Chancellor Angela Merkel says she will stay in close touch with US President Donald Trump on the Iran nuclear deal, which he could scrap.

Mrs Merkel described the 2015 international accord as a "first step" that prevented Tehran from developing nuclear weapons.

Mr Trump vowed to never let Iran have nuclear weapons, but would not say if he would consider military force.

Mrs Merkel was in Washington for a brief "working visit" with Mr Trump.

The optics of her trip contrasted starkly with the pomp and ceremony rolled out for French President Emmanuel Macron during his glitzy state earlier visit this week.

The German leader's differences with the US president on trade were laid bare at their Friday afternoon press conference.

She hoped to persuade Mr Trump not to impose US tariffs on European steel and aluminium products.

Berlin expects a US exemption on global duties to expire on 1 May.

Mrs Merkel was asked by a reporter whether she had secured an assurance from Mr Trump not to impose the duties.

"The president will decide. That's very clear," she said, amid a co-ordinated lobbying campaign with other European leaders.

"We had an exchange of views.

The decision lies with the president."

Mr Trump said he wanted a "reciprocal" trade relationship with Germany and other European nations.

The other deadline looming large for the German chancellor is 12 May, when Mr Trump must decide whether to revive US sanctions on Iran.

Doing so could kill off the 2015 Iran nuclear deal, which world powers view as crucial to preventing Tehran from developing nuclear weapons.

The German chancellor is hoping to persuade Mr Trump not to torpedo the pact, which Germany - along with the US, France, UK, China and Russia - helped seal.

The US president has demanded an overhaul of the accord to curtail Iran's ballistic missile programme and its sphere of influence in the Middle East, which has alarmed America's ally Israel.

Mrs Merkel said the Obama-era pact was a "first step that has contributed to slowing down their activities in this particular respect".

During his visit, the French president also lobbied Mr Trump to preserve the Iran agreement.

But despite all the headlines about the two leaders' tactile "bromance", Mr Macron said he suspects the US president is going to pull out of the accord for "domestic reasons".

For his part, Mr Trump pressed Mrs Merkel to bolster spending on the German armed forces, up to the 2% of GDP required by Nato.

On Friday, Mrs Merkel said Germany would spend 1.3% on defence, a slight increase.

Last year, on her first Washington trip since Mr Trump took office, there was an awkward moment when Mr Trump apparently misheard her offer of a handshake.

But on Friday he warmly shook her hands after greeting her with a cheek kiss.

As he welcomed her to the Oval Office, Mr Trump insisted he has "a really great relationship" with his visitor.