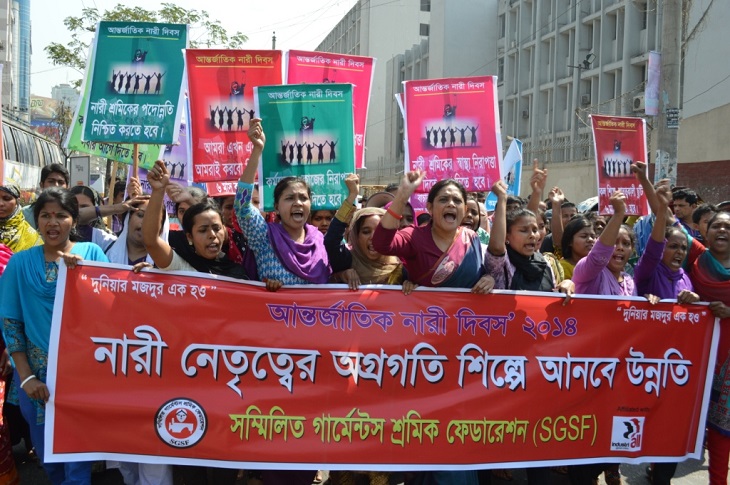 Despite a gradual increase in women's participation in Bangladesh politics, it is still facing a lot of problems in all steps.

According to experts and persons concerned, amid a change in overall political scenario in the country, the women's presence in this field has remained at a level which is not at all up to the mark and they are lagging far behind in other areas also.

Political analysts believe though the lackluster continued the women empowerment in the political arena in the last two decades has gained a permanent shape due to a very positive role of the political parties having representation in the Jatiya Sangsad (parliament).

The number of reserved seats for women in parliament has risen from 30 to 50 over the years. But in the direct election, the participation of women has remained at the lowest level as the political parties are still reluctant to nominate female poll aspirants to undo the domination of their male counterparts in the parties.

In the 10th parliament election, the country got 50 reserved seat women MPs (Member of Parliament) -- 42 from the ruling Awami League, six members from the opposition Jatiya Party and two others from the ruling coalition partners- Jatiya Samajtantrik Dal (JSD) and Workers Party of Bangladesh.

Earlier, in the ninth parliament, a total of 55 women candidates directly vied for membership of the Jatiya Sangsad and 19 of them achieved victory in the poll race.

Apart from four cabinet ministers at this moment, women are now holding all the prestigious positions in the parliament-the leader of the House, Speaker and leader of the opposition.

Outside the political arena, women are gradually gaining higher positions in civil administration, defense forces and law enforcement agencies. The country now has six female officials at the secretary and additional secretary levels.

political institutionalization in the country.

Indira said Awami League's last central council this year picked some 15 women leaders, including party president Sheikh Hasina, in the 81-member central executive committee and the figure was 11 in the last council in 2012.

But she hoped that Awami League would be able to ensure 33 percent women leaderships in all committees by 2020.

Talking to BSS, BNP Women Affairs Secretary Noor-e-Ara Safa said, "Women's participation in Bangladesh politics is gradually increasing
side by side with all committees of the party."

She said BNP Chairperson Begum Khaleda Zia is leading a 502-member central executive committee of the party, of which, 12 percent are women. Besides, in the 19-member BNP standing committee, Begum Sarwari Rahman is the lone female member. In the 18-member panel of BNP vice-chairmen, Rabeya Chowdhury and Selima Rahman are the two female members. Only five females are included in the 121-member BNP secretariat.

Jatiya Party has only 7.69 percent women representatives in the party organizational set up. The 55-member JP executive committee has only six female members.

The women leaders have to face various family, social and religious hurdle in doing politics.

"I have become a councilor facing different obstacles . . . My father-in-law, his family members and locals did not accept me easily. They always tried to make me understand the people's religious sentiment against female leadership, my security, so and so . . ." Kahinur Rizvi, a councilor of Moukaron Ward of 4 number of Laukhathi union under Patuakhali Sadar upazila, told BSS.

Rizvi mentioned that her husband encouraged her in doing politics and in some cases of arbitration he used to provide cooperation.

Kohinur, meanwhile, demanded of the government to ensure a proper sitting arrangement for the women councilors and toilet facilities in each union council office.

She urged the authorities concerned to remove discriminatory allocation of government grants including VGF (Vulnerable Group Feeding) cards and other facilities between male and female councilors to gear up women empowerment activities.