‘For you is your religion, and for me is my religion’

Where is the multicultural and multi-religious Bangladesh we grew up in? 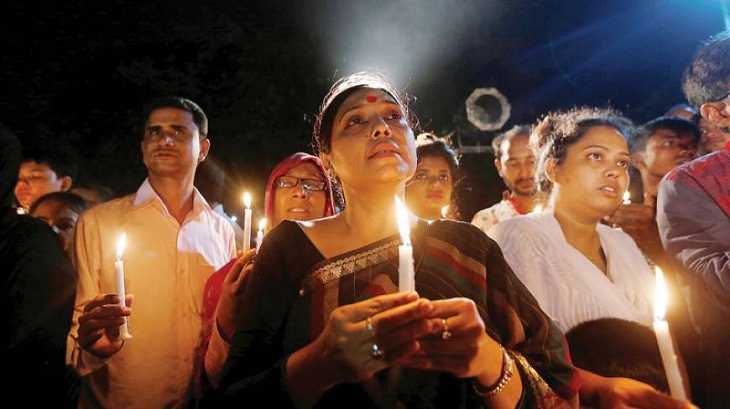 Are we all guilty of the horrendous attack that took place?

I am a thousand miles away from my home. I am at a place where, for the last four days, every non-Bangladeshi I have met has been asking me if I am okay or if I had lost any friend or relative in the horrible killing that happened in Dhaka on July 1 (one of the darkest night in many people’s lives, including mine).

I answered: “Though none of them was well-known to me, I am in pain. I feel like I have lost family members and close friends.”

I couldn’t gather the courage to say: “I am okay. I am fine.” Because I am not.

Bangladesh is mine, though I belong in the minority -- sex-wise, class-wise, ethnicity-wise. The only way I can connect to my country is either by logging into social media, or scrolling across online news.

And all over my newsfeed and the news media is the horrible, heinous incident which happened in my home country, which once was globally known for its tolerant and welcoming citizens, and for its hospitality.

Yes, once. Not anymore. I am sorry if I offend anyone but please, at least now, let’s speak the truth. Our denial has already crippled our country, people’s lives, and security.

Every explicit and implicit justification in relation to the killing and oppressing of minorities and secularist individuals is guilty for what happened on July 1.

And Bangladesh becoming intolerant, racist, and a non-secular country didn’t happen in a single day. Minorities have been facing the wrath of extremism for a long time.

Many of you haven’t. Thus, many of you didn’t feel the pain until the night of July 1.

Did the night of July 1 hurt a lot? Why? Because 20 wonderful and promising people were killed?

Did it hurt the same when more than 20 people from minority sections were being killed and oppressed in other parts of Bangladesh? Or is it only now that you are shaken?

Because it happened in one of the posh areas which we all thought was comparatively safer than the areas where minorities’ livelihoods are based?

You might already know, but I want to highlight that even there, in the Gulshan incident, minorities were the prime target. Not the majority, in terms of religion and nationality. In order to explain further, I want to share two experiences.

I was traveling with my elder sister in the late 90s, during Ramadan. At the Manikchari Police Check Post, the police stopped our bus for a regular check-up.

My sister was drinking water, and the police constable, who was about to get down from the bus, came back and asked in a certain tone and attitude: “Aren’t you a Muslim?”

My sister replied: “No.”

In a harsher tone, he responded: “This is Ramadan. You shouldn’t be having any food or drink.”

My sister managed to answer: “I told you, we are not Muslim and we are not fasting. So we have the right to have food whenever we are hungry.”

We were shamed publicly for drinking water. We were not supposed to be thirsty and have water because it was Ramadan, even though we were not Muslim.

I wonder how many such moral police are around us nowadays who think it is a duty to shame and blame others who do not belong to his/her own faith?

Who thinks that it is okay to shut the minorities up, to make minorities fast in a way too, to force minorities to change their attire and food habits in Bangladesh, because these attributes belong to the majority people’s religion? How many such people do you come across daily? Few?

My grandfather from my mother’s side was taken by the Pakistani occupational armies on March 25, 1971 when he was serving as a police officer in Comilla. For being a Bengali Hindu. My mother’s family never saw him again.

At that time, my mom and her family locked themselves inside their house so that it seemed that all of the family members had left. So that they stayed alive.

Even with limited food, they remained alive. Because a Muslim imam never forgot to supply my mom’s family food through the tiny hole of their closed door.

My mom and her family stayed alive until the Liberation War ended in December 1971.

My mom has been trying to get the “martyr” status for my grandfather. A source in the government office said my grandfather won’t get the status unless my mom dishes out the bribe, and because he was a Hindu and Hindus can’t be shahid -- an Islamic term given to martyrs.

Where is that Muslim Imam now? The one who helped a non-Muslim family when non-Muslims and non-Pakistanis were being executed. How many of such kind-hearted humans do you actually know of nowadays? Many?

You ask yourself which type of people are more visible and dominant now in Bangladesh? Who are you scared of? Do you speak against such force? You might not support what they are doing, but believe me, that is not enough. You are contributing in spreading the culture of intolerance when you don’t raise your voice against their moral policing based on religion and nationality.

Now, based on these questions, you decide, whether you and I are guilty for this Bangladesh or not.

I grew up in a multicultural and multi-religious environment. Many days of my childhood, my dad made my siblings and I read pages out of the Holy Quran, the Tripitok, the Bible, and the Gita.

We celebrated Eid, Puja, Christmas, and almost every occasion that we came across, and we still do. And I am pretty sure our family is not the only one.

There are many families who grew up under a single culture, but stayed human, rather than claiming themselves better than others who do not belong to their religion or ethnicity. I am thankful to those kinds of friends and their families.

Sharing what one friend said after the night of July 1: “If they had asked me to recite a verse of the Holy Quran, as a deciding factor to kill me or not, I would have said: ‘Here is one for you -- Lakum di nukum wal ya deen -- for you is your religion, and for me is my religion’.”

One can always find ways to spread hatred using religion, ideology, and nationality, especially when we fall divided in so many clusters. But we can also get together and help the world and ourselves in cultivating tolerance, peace, and love if we really want to. What do you want to do?

Writer: Muktasree Chakma Sathi is an activist, feminist, and researcher presently working with Minority Rights Group International and SANGAT, a South Asian Feminist Network. You can follow her on Twitter @SathiChakma.