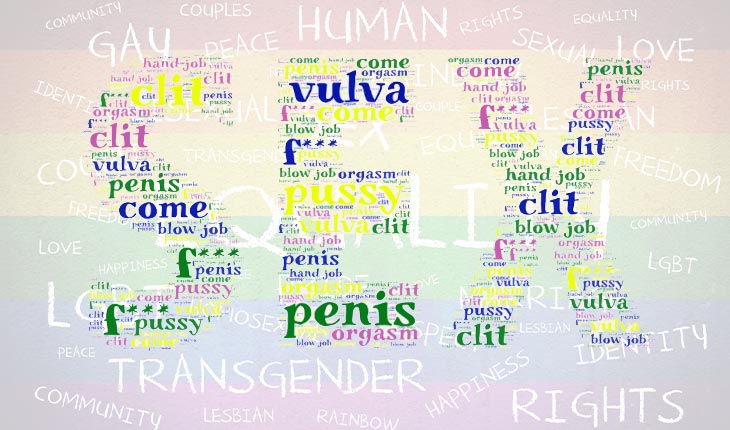 You might have grown up and realized that “eating out” means more than just getting some Burger King, but when it comes to other sex-related terms, there's a good chance there's still a word or two out there you don't know.

Even though it's probably been years since you had to race home and Urban Dictionary what what your friends were talking about during study hall, language keeps evolving. This means there are more terms, slang, and sexual orientations you gotta add to your repertoire in order to stay relevant at best, and straight-up not offensive at least.

That’s where our sex glossary comes in handy. Some of these words are slang, some are sexualities, some are positions, and some are kinks, but they're all important to know for exploration and representation.

Many of these are abbreviated definitions from their own stand-alone Sexopedia entries to give you an idea, but if you want to learn more, just click on a word to dive deeper.

Abrosexual: A sexual orientation that describes someone whose sexual preferences and/or attraction changes over time. This could look like someone who has once said they are bisexual later coming out as asexual.

Allosexual: A sexual orientation that describes someone who experiences any type of sexual attraction to someone or something.

Amazon (position): An advanced sex position that’s a combination between missionary and cowgirl. The bottom partner lies down on their back with their knees bent up in the air, and the top partner get between their legs and slowly lowers down onto their partner. Both parties are intertwined, and the top partner uses their knees and hands for balance.

Anorgasmia: The inability to have an orgasm.

Asexual: A person who doesn’t experience a lack of sexual desire. They can be attracted to someone but don’t feel the need to get physically intimate with them.

Autosexual: Someone who feels a sexual attraction toward themselves.

Bisexual: Defined by GLAAD as someone who “has the capacity to form enduring physical, romantic, and/or emotional attractions to those of the same gender, or to those of another gender.”

Blue Balls: As a slang term (aka not a medical term), “blue balls” refer to the pain someone feels in their scrotum from prolonged sexual arousal without ejaculation. Blue balls is not dangerous, not actually a medical condition, and doesn’t cause any long-term damage, nor do the balls turn a blue shade.

Bulge: The visible outline of a penis through someone’s pants.

Ceterosexual: Someone who's attracted to a person who is non-binary, transgender, and in some cases, anyone who isn’t cisgender. You may hear people use the term "skoliosexual" also, but this is no longer appropriate since “skolio” means “crooked” in Latin.

Circumcision: The removal of the foreskin of the penis to reveal the head. The procedure typically happens when the person is a baby, although it can sometimes be performed during adulthood for medical reasons, religious reasons, or just because a person wants it.

Cowgirl: A sex position where you have your legs on the outside of your partner’s hips and face them.

Cosplay: Short for “costume play” and refers to dressing up as one of your favorite characters from pop culture and taking on the persona of that character.

Cupiosexual: A word that falls under the larger asexual spectrum that describes someone who still desires a sexual relationship, despite feeling little to no attraction.

Deep Throating: A blow job technique where the giver puts as much of the penis into their mouth as they can (sometimes the whole penis), which can sometimes cause gagging or even vomiting.

Demisexual: A sexual orientation that defines a person who needs to feel a strong emotional connection with someone in order to feel any sexual attraction to them. In other words, demisexual people are capable of sexual attraction but only in specific circumstances.

Diaphragm: A contraceptive device that sits at the opening of the cervix to block sperm.

Dirty Sanchez: An act where someone puts their finger into their partner’s ass, then wipes any fecal matter that may transfer onto their finger over that person’s lip, resulting in a poop mustache. FWIW, it’s generally accepted that this act is more urban legend than something you’d actually encounter in the bedroom.

Dirty Talk: Talking about sex acts with your partner in an explicit, arousing way before or while engaging in sex acts.

Doggy-Style: A sex position where the receiver is on their hands and knees while their partner enters them from behind.

Edging: Refers to delaying an orgasm for as long as possible with the goal of having an ultimately more intense climax.

Face-Sitting: When someone dangles their genitals over their partner’s mouth to receive oral sex.

Facial: When referring to the sex definition of a facial, it’s when a penis-haver ejaculates semen onto their partner’s face.

Foot Fetish: A sexual interest in feet. A person with a foot fetish may be aroused by touching, licking, rubbing, kissing, sucking, and massaging of feet.

Foot Job: Similar to hand jobs, but involves using feet rather than hands to rub and stimulate a partner’s genitals.

Greysexual: Also called graysexual, grey-ace, or gray-ace, greysexuality falls within the asexual spectrum and defines individuals who experience sexual attraction and sexual feelings very rarely—anywhere from a few times in their whole life to anything more frequently.

Hickey: Also known as a “love bite.” A hickey is caused by one person sucking the other’s skin (usually on their neck) until small blood vessels burst, creating a patch of discoloration, aka a bruise.

Jelqing: The practice of stroking the penis when erect in a particular way to increase its size. This is a similar concept to using a penis pump.

Mile-High Club: Refers collectively to anyone who has ever had sex on a plane.

Missionary: A sex position where one person lies down on their back, while their partner gets on top and thrusts and grinds on them.

Motorboating: The act of putting your face in between someone’s breasts and moving your head back and forth quickly while making a raspberry sound with your tongue and lips (like the sound of a motorboat.)

Omnisexual: A sexual orientation that describes someone who's attracted to all people, regardless of their gender.

Orbiting: When your ex continues to interact with all your Instagram Stories and social media, letting you know they’re still around.

Pansexual: The sexual, romantic, emotional, physical, or spiritual attraction to people regardless of their specific gender identity or sexual expression. Pansexuality falls under the bisexuality umbrella but goes beyond being attracted to both men and women.

Pearl Necklace: When someone with a penis ejaculates onto their partner’s neck or chest. The term comes from the drops of semen that are said to look like the individual pearls on a strand of beads.

Period Sex: Having sex while you menstruate.

Pillow Princess: Someone who likes to lie back and let their partner do most of the physical work during sex.

Polysexual: Someone who's attracted to many genders and identities.

Pompoir: Using vaginal muscles in different ways to stimulate the penis during intercourse.

Pregnant Sex: Sex while carrying a baby inside you.

Roaching: When someone you’re dating hides the fact they are also dating other people at the same time, and when confronted about it, claim they didn’t realize it was a monogamous relationship.

Rough Sex: Basically the opposite of “making love.” Refers to any sort of S&M (sadistic and masochistic) sexual activity. The definition of “rough” varies from person to person, so there’s no hard and fast rule here. Talk to your partner about what they define “rough” as if you’re going to experiment with consensual rough sex.

Rusty Trombone: The act of performing a simultaneous rim job and hand job.

Sex-repulsed: Most commonly used within the asexual community, "sex-repulsed" is a way of experiencing one’s sexuality, but it’s not a sexuality in and of itself. Sex repulsion can mean someone finds sex disgusting or revolting and in general, would not want to look at, hear about, talk about, or think about sex or any sexual activity.

Shrimping: The act of sucking on your partner’s toes.

Situationship: A catch-all term for relationships sitting at the intersection of “hooking up” and “in a relationship.”

Sixty-Nine (69): A sex position where two people simultaneously give each other oral sex.

Snowballing: A sexual act where a penis-haver ejaculates into their partner’s mouth, then open-mouth kisses their partner, passing the semen back and forth into each other’s mouths.

Spooning: When two people lie side-by-side, butt-to-back. The small spoon is the person on the inside, and the big spoon is on the outside.

Submarining: When an ex pops back into your life and then acts like nothing happened during the period you weren’t together.

Tantric Sex: Sex that lasts for hours and hours and involves study, meditation, breath-work, eye contact, and intimacy with your partner.

Teabagging: When a penis-haver places their scrotum into the mouth or onto the face or forehead of another person, usually while standing or kneeling over that person.

Thigh Job: A sexual act where someone's genitals are stimulated by a partner's thighs. A thigh job can be done with clothes or bare thighs, thighs in latex, pantyhose, thigh highs, lubed up, or without lube.

Yoni Massage: A tantric practice used to increase sensitivity in the vagina and vulva.