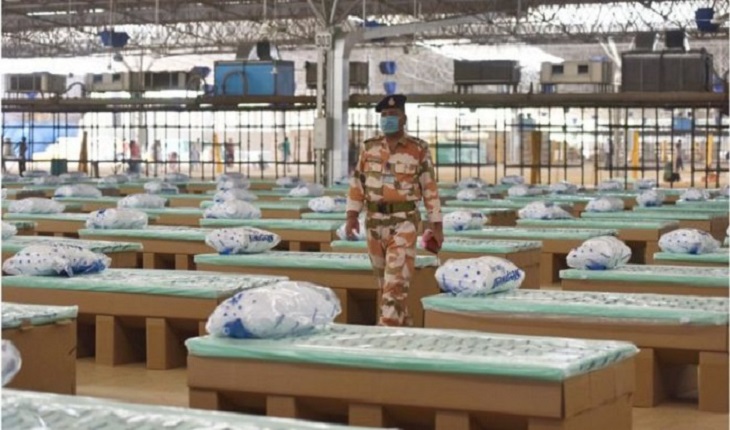 A 14-year-old girl in a Covid-19 quarantine centre in India's capital Delhi was allegedly sexually assaulted by another patient within the facility.

The accused, 19, and another man who allegedly filmed the incident have been arrested, police said on Thursday.

All three had tested positive with mild symptoms and were in quarantine in India's largest Covid-19 centre - a facility with 10,000 beds.

News of the alleged assault, which took place on 15 July, has just come out.

Police told The Indian Express newspaper that they have registered a case against the two men.

"The accused have been arrested and sent to judicial custody but will remain in institutional care until they recover from the infection," senior official Parvinder Singh said, adding that they are further investigating the incident.

The alleged assault took place in the bathroom, according to several local media reports.

Authorities were called in after the girl first reported the crime to a family member who was in the centre with her.

The quarantine centre, billed as the world's largest, is meant for those who are asymptomatic or have mild infections but do not have the option to isolate at home.

With more than 1.2 million cases and the third highest caseload in the world, the pandemic has badly hit India, prompting many states to set up isolation wards.

But this isn't the first time an assault has been reported from within these quarantine facilities in India.

Last week, a woman was allegedly assaulted while under quarantine in a centre in Mumbai and a man was arrested in Patna in Bihar state after a minor was reportedly raped inside an isolation ward in the city.