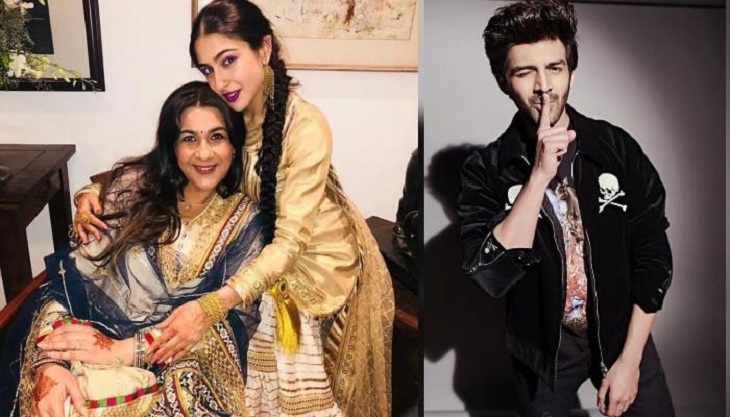 Sara Ali Khan hasn’t kept her crush on Kartik Aaryan a secret. Ever since she first spoke about it in an episode of Koffee with Karan, she has been asked about how the story has progressed. In a new interview, the Kedarnath and Simmba actor said that her mother, Amrita Singh, has given her some advice about the matter.

“No, no, no...how much! I have said it everywhere. Itna bhi desparate nahi (I’m not that desperate). Mom said you must wait. So, I am waiting!” she told Box Office India, when asked why she doesn’t send him a message on Instagram, reports Hindustan Times.

Sara in an episode of Karan Johar’s chat show had said that she wants to date Kartik, to which her father and co-guest, Saif Ali Khan retorted, “Has he got money? If he has money he can take her.”

Kartik was asked about Sara’s comments shortly afterwards, to which he replied that he’d also like to take her out for coffee. “I don’t know what to say to that. All I can say is that she is very pretty and I am really looking forward to her film,” Kartik, who starred in the Rs 100 crore hit, Sonu Ki Titu Ki Sweety recently, said.

The two were introduced to each other on camera at the recent Lokmat Awards by Sara’s Simmba co-star, Ranveer Singh. Playing cupid, the actor even got them to hold hands, and with a cheeky smile, said, “Glad, you guys have met.”

Kartik will next be seen opposite Kriti Sanon in Lukka Chuppi. Sara’s second film, Simmba, has gone on to do great business at the box office, collecting more than Rs 200 crore worldwide. She is rumoured to be in contention for the new Imtiaz Ali movie as well.