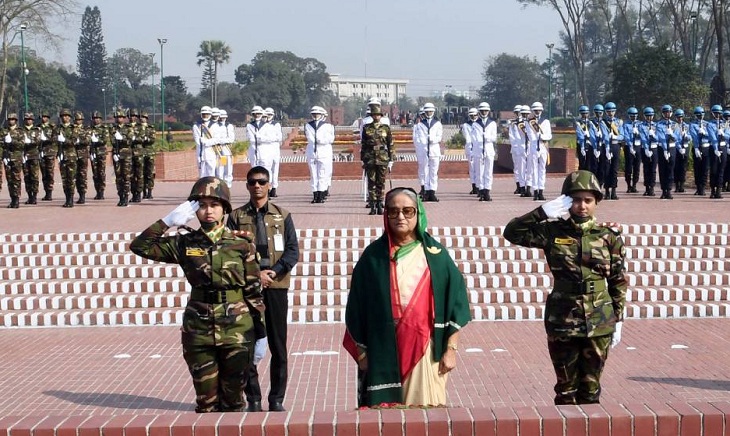 Prime Minister Sheikh Hasina and her new cabinet colleagues paid tributes to the Liberation War martyrs to National Memorial at Savar on the occasion of installation of her government for the third consecutive term.

Earliar in the morning, the Prime Minister paid homage to Father of the Nation Bangabandhu Sheikh Mujibur Rahman.

Sheikh Hasina paid tributes to Bangabandhu by placing a wreath at his portrait in front of Bangabandhu Bhaban at Dhanmondi in the capital this morning, a day after she took oath as the prime minister for the fourth time.

AL President Sheikh Hasina took oath as the prime minister for the fourth time, the third in a row, with a 47-member council of ministers yesterday, a week after the Awami League-led Grand Alliance’s landslide victory in the 11th parliamentary election held on December 30 last.

President M Abdul Hamid administered the oath of office and oath of secrecy to Sheikh Hasina and her new cabinet members.