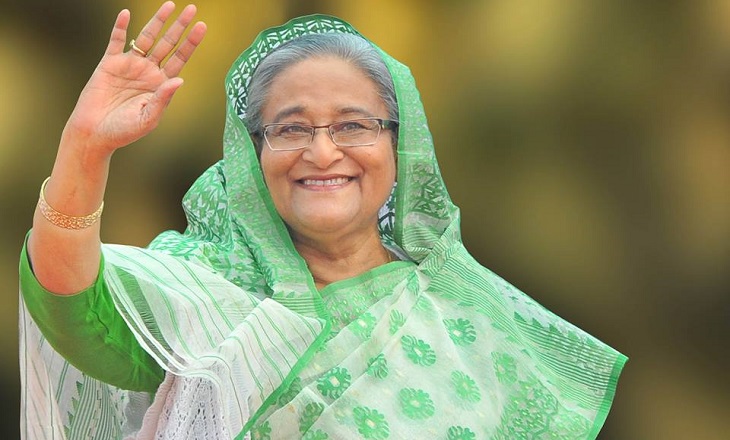 Awami League (AL) President Sheikh Hasina is set to be the prime minister for the fourth time, third in a row, as she was unanimously reelected the leader of the AL Parliamentary Party on Thursday.

“The daughter of Father of the Nation Bangabandhu Sheikh Mujibur Rahman, Sheikh Hasina, who is the celebrated leader of the mass people and a prominent politician in the international world, is going to be the prime minister for the fourth time as we reelected her unanimously the leader of our parliamentary party,” AL Advisory Council Member Tofail Ahmed told reporters emerging from the maiden meeting of the AL Parliamentary Party (ALPP) held at Sangsad Bhaban here this afternoon.

Tofail, also the commerce minister, said AL General Secretary Obaidul Quader proposed the name of Sheikh Hasina as the ALPP leader, which was seconded by senior leader of the party Amir Hossain Amu.

“After the election, we all the elected lawmakers congratulated Sheikh Hasina through huge clapping,” he said.

About the party’s reelection with landslide victory on December 30, the veteran AL leader said: “We’ve entered the golden days afresh…. the next five years are golden days for Bangladesh.”

The commerce minister said Bangladesh will celebrate the birth centenary of the Father of the Nation in 2020 and the golden jubilee of independence in 2021 under the leadership of Prime Minister Sheikh Hasina.

Replying to a question about joining of the Jatiya Oikyafront lawmakers in parliament, he said the representatives of all parties who were elected in the Jatiya Sangsad should come to parliament.

While talking to reporters after the ALPP meeting, AL General Secretary Obaidul Quader said, at the meeting, the AL president asked all to work in unison to fulfill the hopes and aspirations of the people.

The AL president, he said, also directed all to work together to fulfill the election pledges of the party and strengthen the party at the grassroots level.

“The prime minister said the opposition may go for a legal battle or any type of movement and asked all to remain ready for facing any situation,” Quader told reporters.

Replying to a question about the joining of Jatiya Oikyafront MPs in parliament, the AL general secretary said: “It’s a matter of their own decision … we’ve nothing to do. But I think they should honour the people’s verdict.”

About the formation of the cabinet, Quader said as the leader of the majority party, the prime minister and AL president is likely to meet the president any time between afternoon and evening today.

Responding to a question on Jatiya Party’s joining in the cabinet, the AL general secretary said no discussion was held on the issue in today’s ALPP meeting. “We cannot make any comment about the matter without discussion,” he added.

Quader expressed optimism that the 11th Jatiya Sangsad will be an effective parliament through the coordination of the fresh and the experienced lawmakers.