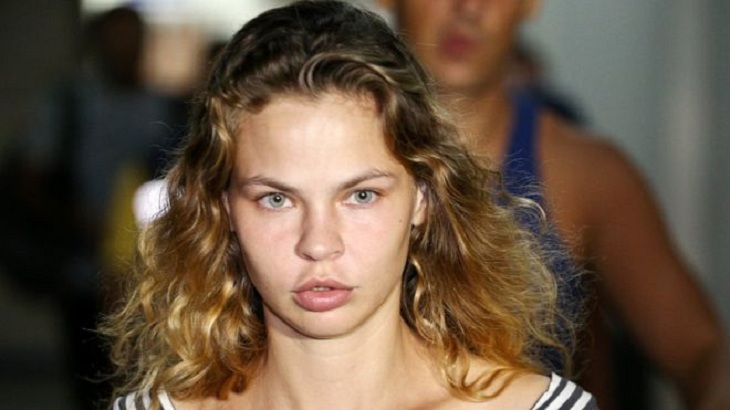 A Belarusian model who said she had evidence of Russian collusion with Donald Trump's election campaign is now in Russian police custody.

Nastya Rybka (real name Anastasia Vashukevich) was detained at Moscow's main airport after being deported from Thailand for soliciting.

Her lawyer posted a video on Instagram which, he says, shows her arrest.

A woman resembling her and looking sedated struggles as four men push her into a wheelchair, then carry her.

The video clip posted by lawyer Dmitry Zatsarinsky has now been tweeted by Russian broadcasters and anti-corruption blogger Alexei Navalny.

Mr Zatsarinsky said Rybka, 27, had planned to get a connecting flight to Minsk, the Belarusian capital, but had been seized and dragged from the transit zone on to Russian territory, then whisked away to a police station.

He called the Russian action "an international scandal".

A Russian interior ministry statement, quoted by Russian media, says Rybka and three others detained with her at Moscow's Sheremetyevo airport are accused of "luring into prostitution and practising it". The crime can be punished with up to six years' jail.

Among the four held is Alexander Kirillov, a Belarusian self-styled sex guru, who was in custody with her in Thailand.

They spent nine months in custody before a Thai court handed them a suspended 18-month sentence for soliciting and running an illegal "sex training course". Thailand deported them on Thursday, taking account of their time spent in custody.

They and five others - both Belarusians and Russians - pleaded guilty, after which they were deported.

While in custody, Rybka and Kirillov sought help from the US embassy, fearing extradition to Russia.

Rybka said she had evidence of Russian interference in the 2016 US presidential election campaign, allegedly obtained through an acquaintance with Russian billionaire industrialist Oleg Deripaska.

Mr Deripaska denied the allegations and successfully sued both her and Kirillov.

Mr Deripaska is on the list of Russian oligarchs and politicians subject to US sanctions for alleged "malign activities" around the world.

Now Rihanna forbids Trump to use her songs at rallies