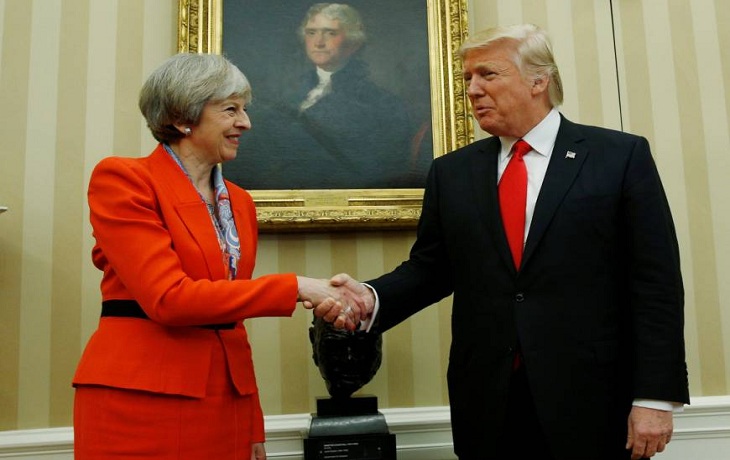 The US president did not specify which aspect of the deal concerned him but told reporters the withdrawal agreement "sounds like a great deal for the EU".

No 10 insisted the deal is "very clear" the UK would have an independent trade policy so it can sign trade deals with countries around the world.

Mrs May fought off heavy criticism of her Brexit deal from MPs on Monday.

Insisting the agreement "delivered for the British people" by regaining control of laws, money and borders, she said it would be put to an MPs vote on 11 December.

Hours later, Mr Trump told reporters outside the White House: "We have to take a look seriously whether or not the UK is allowed to trade.

"Because right now if you look at the deal, they may not be able to trade with us. And that wouldn't be a good thing. I don't think they meant that."

It would appear Mr Trump was suggesting the agreement could leave Britain unable to negotiate a free-trade agreement with the United States.

However, responding to Mr Trump's comments, a Downing Street spokesman said the Brexit withdrawal agreement struck on Sunday would allow the UK to sign bilateral deals with countries including the US.

"We have already been laying the groundwork for an ambitious agreement with the US through our joint working groups, which have met five times so far," the spokesman added.

The BBC's North America Editor Jon Sopel said Mr Trump's comments were provocative, given trade would "carry on in much the same way as before" for the time being.

"Donald Trump knew exactly what he was doing with these remarks," he said.

"There is a very open line of communication between senior members of his administration and prominent Eurosceptics."

During Mr Trump's UK visit in July - days after the British prime minister unveiled the proposals that formed the basis of the Brexit agreement - the US president had suggested an "ambitious" US-UK trade deal would "absolutely be possible".

Billions of pounds in trade already flows between the UK and US - Britain's largest single export market.

EU trade rules currently prevent the UK forging what some might view as a more advantageous bilateral trade deal with Washington.

Under the deal agreed in Brussels, the UK would continue to trade with the US under EU rules until at least the end of the "transition period" in December 2020.

During this transition - designed to allow businesses and others to prepare for the moment new post-Brexit rules kick in - the UK will be able to negotiate and strike deals with the US.

However, they will be unable to come into force until 1 January 2021 and could be delayed further if the backstop is triggered.

Tory Brexiteers fear the "backstop" written into the withdrawal agreement - which aims to prevent the return of customs posts on the Irish border in the event no UK-EU post-Brexit trade deal being agreed - could result in Britain being tied to EU rules for the long term.

In the Commons on Monday, Mrs May acknowledged the backstop was an "insurance policy no-one wants to use" but insisted the UK would have the right to determine whether it came into force.
She faced sustained criticism of the deal from MPs on all sides of the Commons.

Labour leader Jeremy Corbyn said Mrs May had brought home a "botched deal" that would "leave the UK worse off".

The SNP's Iain Blackford said the agreement was "full of ifs and buts" which would result in Scottish fishermen being "sold out" while the Lib Dem leader Sir Vince Cable and Green Party MP Caroline Lucas both called for another referendum.

And the DUP's Nigel Dodds said the backstop "was bad for the United Kingdom and bad for the economy" and absolute certainty was needed over its legal application.

Tory backbencher Mark Francois was among a host of MPs to urge PM to think again, claiming the agreement was "as dead as a dodo" and "would not get through" Parliament.

EU, UK inch closer to a deal as Brexit hangs in the balance