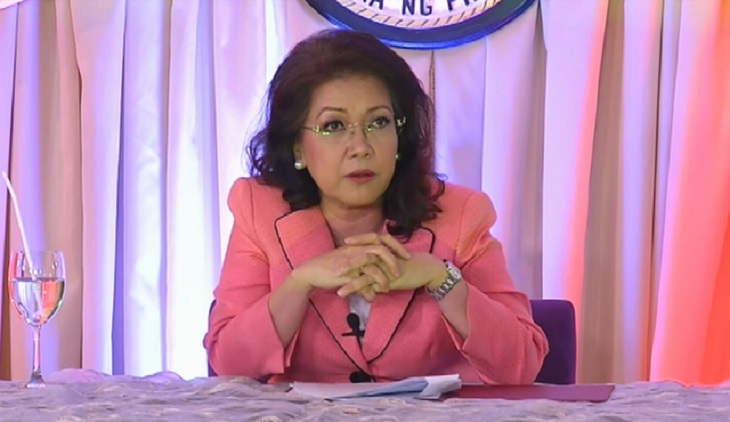 Maria Lourdes Sereno rose to become the first woman to lead the Philippines' top court in a legal career marked by exception.

But she notched a darker distinction on Friday when she became the nation's first chief Supreme Court justice to be sacked by her own colleagues.

She was facing ouster efforts from within and outside the court after tangling with President Rodrigo Duterte over his deadly anti-drug crackdown and other human rights issues.

Duterte warned her last month: "I'm putting you on notice that I am now your enemy and you have to be out of the Supreme Court".

Long before Friday's vote, which stemmed from allegations she failed to file statements of assets and liabilities in past years, Sereno was a star student.

The 57-year-old graduated valedictorian from her law school in Manila and went on to get a masters degree from the prestigious University of Michigan Law School.

In her early career she served as a legal consultant to government agencies and worked with the World Trade Organization's appeals body.

Her biggest achievement came in 2012 when at 52 she became the second youngest person selected to lead the nation's judiciary.

However, she stepped into a role that was only vacated when her predecessor Renato Corona was sacked after senators found him guilty of graft in an impeachment trial.

When then-leader Benigno Aquino appointed her, he bypassed five more senior justices, which did not sit well in the legal establishment.

Some of the judges also openly criticised her for alleged disrespect and for violating the court's "collegial nature".

'Unwarranted use of power'

Trouble really began in 2016, with the landslide election of Duterte and the launching of his bloody crackdown on drugs that has killed thousands.

Sereno fought the president when he ordered judges allegedly involved in narcotics to turn themselves in, saying authorities needed an arrest warrant.

She also voted against two of the president's high-profile initiatives, which were ultimately validated by the court.

They included his declaration of martial law in the southern Philippines after Islamist militants invaded the city of Marawi and his move to give dictator Ferdinand Marcos a hero's burial.

Sereno was also facing an impeachment effort led by Duterte allies in the lower House of Representatives.

She has been accused of failing to pay about two million pesos ($40,000) in taxes as well as falsifying and tampering with court resolutions.

The conflict between the president and chief justice only increased as the anti-drug campaign claimed more lives.

Police say they have killed more than 4,250 people in drug raids but human rights activists say the actual death toll is triple that number.

Sereno has previously warned that summarily removing her would amount to "the wholesale destruction of all government institutions".

Judges and civil servants would know as a result they can easily be sacked if they go against powerful figures, she said.

"The primary role of judges is to protect the citizens from the unwarranted use of power by ensuring their constitutionally guaranteed rights," she told AFP previously.