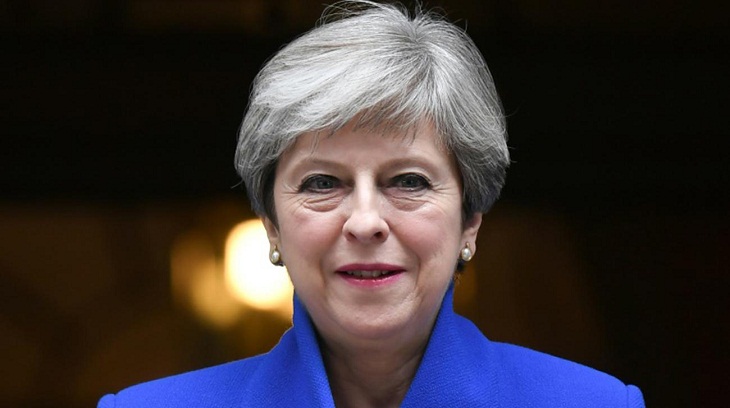 British Prime Minister Theresa May was expected to hold her first cabinet meeting on Saturday in an early test of her hopes of forming a stable government after a crushing election setback.

Facing demands to quit after her electoral gamble failed, May on Friday scheduled an early weekend meeting of her governing circle in an apparent bid to reassert authority and project stability.

But the firestorm of criticism continued unabated early Saturday after May announced she would keep her ministerial team unchanged and planned to stay in power with the aid of a small Northern Irish party.

Media commentators agreed she had been badly damaged, and some predicted she and her strategy for Brexit could struggle to survive.

"May fights to remain PM," the Daily Telegraph headlined. "Tories turn on Theresa," said the pro-conservative Daily Mail. The Times wrote: "May stares into the abyss." The tabloid Sun said succinctly: "She's had her chips."

May was interior minister for six years before rising to premier in the political chaos that following last June's Brexit referendum.

She has vowed to steer Britain unerringly out of the European Union, unwinding a complex economic and institutional relationship that has developed over 44 years.

After inheriting a 17-seat overall majority in the House of Commons, May in April announced a snap election three years ahead of time, declaring she needed a stronger hand in the Brexit haggle.

That move, by a vicar's daughter who styled herself as pragmatic and risk-averse, stunned the country.

May was initially forecast to be on course for a landslide.

But cracks in her campaign-trail performance began to show, and widened with a bad tactical misstep she made on health care for the elderly.

Those flaws were skilfully exploited by Labour leader Jeremy Corbyn, a veteran grassroots activist who hammered away at May as cold and uncaring.

Polling day on Thursday delivered a slap to May, leaving her eight seats short of the 326-seat mark for an overall majority.

Forced into minority government, May is reaching out to Northern Ireland's Democratic Unionist Party (DUP), which won 10 seats, in the hope of forging a working majority.

But any deal between the two parties has yet to be announced, and details of how they may cooperate remain sketchy.

"It's too soon to say what we're going to do yet. I think we need to see the final make-up of parliament and then we'll reflect on that," DUP leader Arlene Foster told Radio Ulster late Friday.

"I certainly think that there will be contact made over the weekend but I think it is too soon to talk about what we're going to do."

The DUP is rooted in a hardline form of Protestantism that opposes Ulster's reunification with the predominantly Catholic Irish Republic.

It is socially conservative, notably opposing same-sex marriage, and supports Brexit, but opposes a return to a "hard" border between the Irish Republic and the British province.

The inner Irish border is expected to be one of dozens of thorny issues in the Brexit talks.

The formal parlay, considered by diplomatic veterans as likely to be one of the most daunting negotiations in recent memory, begins on June 19.

But there is only a two-year timeframe for sealing a deal, under a process unleashed by May herself on March 29 and further delayed by her own election gambit.

May's pitch to the eurosceptic rightwing of the Conservative Party has nudged Britain closer to a "hard Brexit," in which it may cut ties with Brussels at the cost of damaging itself economically by losing access to the lucrative single European market, say analysts.

German Chancellor Angela Merkel urged Britain Friday to quickly launch Brexit talks, saying "We are ready for the negotiations. We want to do it quickly, respecting the calendar."

European Council President Donald Tusk also warned there was "no time to lose" in starting the negotiations.

"We don't know when Brexit talks start. We know when they must end. Do your best to avoid a 'no deal' as result of 'no negotiations'."

EU budget commissioner Guenther Oettinger, meanwhile, warned that May was now likely to be a "weak" negotiating partner, which could also be bad for Europe.