Use jute bags, break up with plastics: Prime Minister 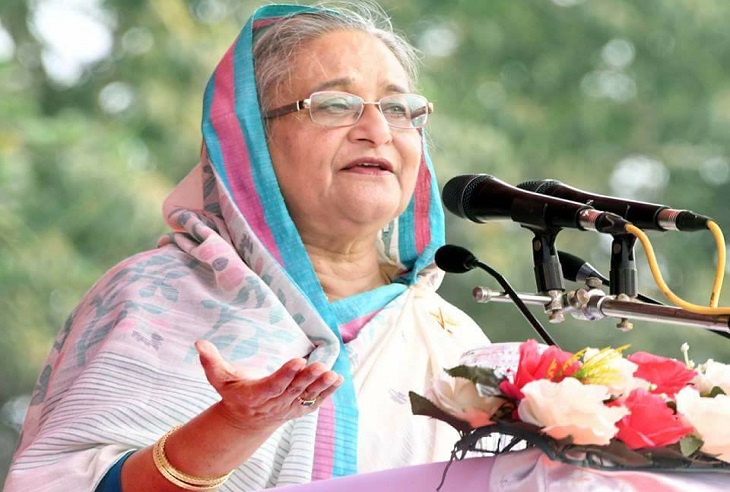 Prime Minister Sheikh Hasina on Wednesday laid emphasis on increasing the use of jute-made products giving up plastic-made ones as plastic now has become a great threat to the environment globally.

"Plastic has become a huge problem for the world; plastic causes pollution. Sometimes we saw it blocks the drainage system and also canals. Wherever there is plastic, you’ll find problem there," she said.

The Prime Minister was speaking at the function of World Environment Day, Tree Fair and Campaign for Tree Plantation at Bangabandhu International Conference Centre (BICC).

She said when Awami League came to power in 1996, it took steps to ban the use of plastic products and find out its alternative.

Stressing the importance of increasing the use of jute-made products, Sheikh Hasina said the government has taken numerous programmes to bring back the golden days of jute and its products.

Sonali Bag, a jute-made ploy bag which is biodegradable and environment-friendly one.

Bangladesh Jute Mills Corporations (BJMC), a wing of the Ministry of Jute and Textiles, is producing Sonali Bag as a substitute for the polythene bag, which is harmful to the environment and human health.

"We can use it as the substitute of poly bags," she said adding that jute-made small bags can be used increasingly.

Fashionable bags are now produced from jute, Hasina said pointing at the handbag she was carrying. “This was also made of jute.”

The Prime Minister went on saying, "New jute-made goods have ushered in huge potentials for Bangladesh as the pollution issue has come up globally."

Hasina said Bangladesh is a jute-producing country and its diversified use can be beneficial for the country both environmentally and economically. "We can export, we can save money; jute is an environment-friendly item."

The Prime Minister also urged all to go for reusing plastic products or refuse it totally as protection of the environment is very much important.

The Prime Minister said the monitoring and enforcement of the Department of Environment has been strengthened.

To make the Department stronger, she said the government has already created 468 new posts in addition to the existing 267 posts.

The theme of this year’s World Environment Day is ‘beat the plastic pollution' with the slogan- If you can’t reuse it, refuse it.

This year’s theme for the National Tree Plantation Campaign and Tree Fair is ‘Live in Green, Protect the Green and Decorate the City-life-Environment’.

The Prime Minister also inaugurated the 30 lakh saplings plantation programme to pay tributes to 30 lakh martyrs of the country's Liberation War on the occasion of ‘National Tree Plantation Campaign and Tree Fair’ by planting a Chatim sapling onthe BCCI compound.

She also inaugurated the National Environment Fair and National Tree Fair 2018 at Sher-e-Bangla Nagar and visited different stalls at the fair.