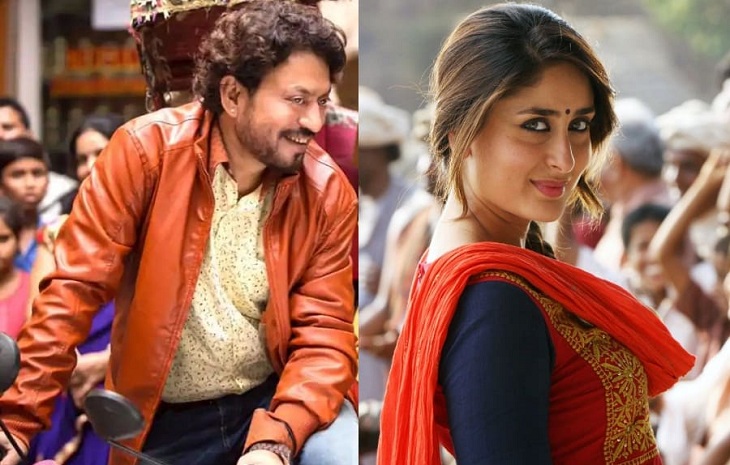 Kareena Kapoor Khan is all set to share screen space with Irrfan Khan in 2017 film Hindi Medium sequel Angrezi Medium. While the actor has worked with the three Khans of Bollywood– Aamir, Salman and Shah Rukh Khan– this is the first time that she will work with “the biggest Khan,” Irrfan.

Happy to collaborate with Irrfan, Kareena told the news agency IANS, “Oh God, I am super excited for this film. I have worked with all the Khans – Shah Rukh, Salman, Aamir and Saif. But for me, it is an honour and privilege to work with Irrfan Khan.”

Kareena plays a cop in Angrezi Medium, a role she has never taken up before in her career. She will start shooting for the film in Mumbai from May 15.

She added, “He is the pioneer, one of the finest actors among all the Khans if I may say, and he is the biggest Khan for me. So, I had to tick that box of acting with Irrfan Khan. I know it is a small role but that does not matter. I know I am too excited, and I am really looking forward to this one.”

The producer of the film Dinesh Vijan has also been excited to have Kareena on board. Earlier, in a statement, he said, “Kareena is a great addition to our franchise. Angrezi Medium is a very special film, and I am excited that she is going to be a part of it. We wanted to introduce this character who would be taken forward in the franchise, and she is perfect for it. Here she plays a cop, a role she is actually never done before. We will be shooting in London this June, and it will be great to be back on set with her.”

Apart from Irrfan and Kareena, the Homi Adjania directorial also stars Radhika Madan and Deepak Dobriyal in pivotal roles. While Radhika plays Irrfan’s daughter, Deepak is his brother in the movie. The team started filming it from April in Udaipur. After wrapping up the Mumbai schedule, they will fly to London where a significant part of the film will be shot.