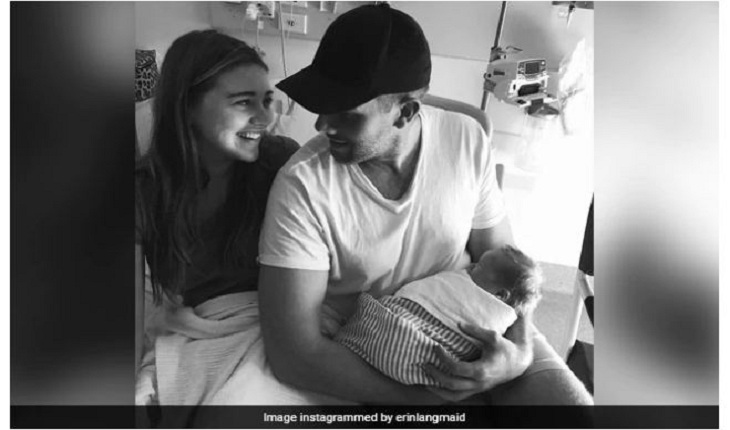 Erin Langmaid says she realized she was pregnant in the bathroom - 10 minutes before giving birth on the floor.

Smiling selfies posted to the 23-year-old model's Instagram in the 37 weeks leading up to her surprise labor show no visible changes in her body. There was no baby bump and no morning sickness, she would later tell Australian media. She was on contraceptives, she said, and all of her clothes fit

A post from a week ago updated Langmaid's thousands of followers with a photo of her and her partner holding newborn baby girl, Isla, wrapped in a blanket.

"The hardest week of our lives," Langmaid wrote.

The story she shared is an extreme case of the rare but well-established phenomenon of "stealth" or "cryptic" pregnancy, experts say. One study estimates that 1 in about 2,500 women do not realize they are carrying a child until they go into labor, while 1 in 475 don't catch on until 20 weeks into gestation. But research on the subject is limited and there's much that medical practitioners continue to puzzle over.

Christine Greves, a Florida-based OB/GYN, sees why many find Langmaid's case "difficult to fathom," especially given her body type. But it's not outside the realm of possibility, she said.

"It demonstrates how amazing our bodies are," Greves told The Washington Post.

Langmaid's baby was born weighing a healthy eight pounds, according to Australian news outlets. The labor was over in minutes. But the birth a couple of weeks ago was still harrowing, the new mother and her partner Dan Carty told 7 News.

Carty heard Langmaid's screams and rushed into the bathroom to find her with Isla, he told 7 News.

An emergency call reviewed by the news outlet documents the young parents' shock, as Carty sought help for a daughter he warned was turning blue.

"How many weeks pregnant was she?" the operator asked, according to 7 News.

"We don't know," Carty reportedly said. "We didn't know she was pregnant. Mother's OK and the baby is not OK."

The operator talked the parents through the crisis, 7 News reported, and Isla emerged healthy. The birth was just the beginning of a tough time, though, Langmaid said.

Stealth pregnancies have been making headlines for years, even inspiring a TLC show called "I Didn't Know I Was Pregnant." One widely reported case from 2015 bears many similarities to Langmaid's: Katherine Kropas, also 23 years old at the time, gave birth to a healthy 10-pound girl despite using birth control, having periods and experiencing no ailments besides mildly swollen feet.

She did gain extra pounds, she told reporters - but nothing visible enough to indicate a pregnancy.

"I thought I had put on some Christmas season weight, but I never thought I was pregnant," she told a CBS affiliate in Boston.

Many in the medical community used to refer to "denied pregnancies," under the belief that surprise births stemmed largely from mothers who didn't acknowledge that they were carrying for psychological reasons. But the term "cryptic pregnancy" has caught on in recent years as people point to cases where women seemingly had no bodily tipoffs.

"Cryptic pregnancies" is a more neutral phrase that doesn't prejudge a woman's experience, said Marco Del Giudice, a professor at the University of New Mexico who advocated for using the term in a 2007 paper. The name also hints at how many aspects of the phenomenon - such as what causes it and who tends to experience it - remain mysterious to the scientific community.

"We don't understand the biological basis of cryptic pregnancy any better than we did in 2007," Del Giudice told The Post.

Doctors do have some ideas about what makes a pregnancy harder to notice. A placenta positioned in a particular way could keep the mother from feeling a baby's movements, said Greves, the Florida OB/GYN. An irregular menstrual cycle - as well the fact that some women experience bleeding during pregnancy - could mean no telltale halt in periods. And it is not impossible to get pregnant while taking birth control.

But Langmaid's experience stands out, said Richard Beckerman, chairman of the obstetrics and gynecology department at Sibley Memorial Hospital in Washington. Decades ago, during his residency, he treated two women who showed up in the emergency room with abdominal pain and did not realize they were pregnant until they'd gone into labor. But those women were overweight, making a pregnancy harder to detect, he said.

He hasn't encountered another case in 30 years of private practice.