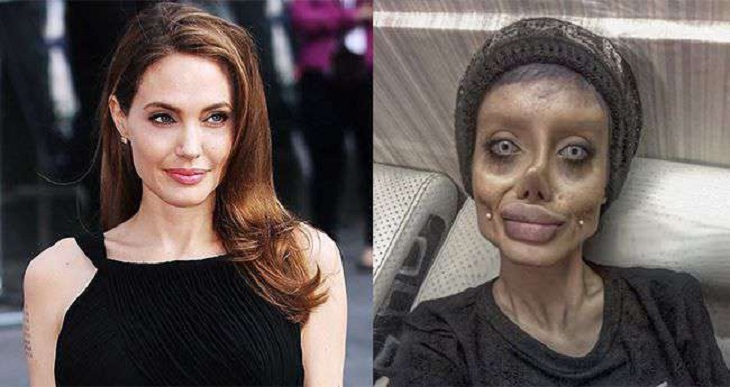 IRAN has arrested a social media superstar on suspicion of blasphemy and instigating violence after complaints about her Instagram posts.

Angelina-Jolie-lookalike Sahar Tabar, from Tehran, shot to prominence on Instagram after posting images of her eerily gaunt face, with some people saying her appearance resembled that of a “zombie.”

The 22-year-old reportedly had 50 surgeries to make her look like the Oscar-winning actress, but she later confirmed most of her distinctive look was achieved through make-up and editing.

She was detained on the orders of Tehran's guidance court, which deals with “cultural crimes and social and moral corruption”, late on Saturday.

Most of the photos and videos shared with her 26,800 followers have also been heavily edited so that she seemingly resembles Hollywood star Angelina Jolie.

In July, Sahar unveiled her former appearance for the first time, sharing side-by-side snaps of her pre- and post- surgery selves.

She later admitted she'd had some surgery, including a nose job, lip fillers and liposuction, but insisted that most of her unusual appearance is down to make-up and editing.

She said: “This is Photoshop and makeup. Every time I publish a photo, I paint my face in an increasingly funny way. It is a way of expressing yourself, a kind of art. My fans know that this is not my real face.”

She added: “I did not even think about being like Jolie. Also, I did not want to resemble the cartoon character the Corpse Bride.

“Now I understand that I have something to do with them, but I am a muse myself and remembering someone is not an end in itself.”

In some images, Sahar can be seen wearing a loosely fitting hijab over her hair and a white bandage on her nose commonly seen on Tehran's streets.

Cosmetic surgery is hugely popular in the Islamic republic, with tens of thousands of operations taking place each year.