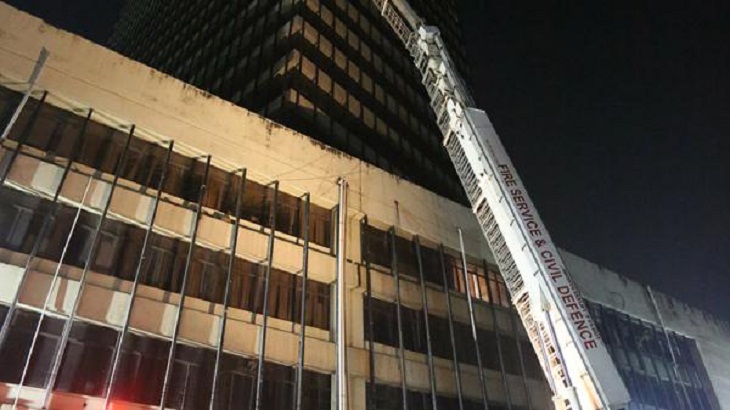 A fire has gutted 10 to 15 percent of a room at the Bangladesh Bank headquarters in the capital’s Motijheel before being doused with an hour-long effort by the fire servicemen.

Fire Service control room official Mahmud Hasan told bdnews24.com that the fire erupted in the room on the 13th floor of the 30-storied building at around 9:30pm on Thursday.

Twelve units of the firefighters doused the blaze at around 10:30pm.

An official of the central bank said the floor houses the bank’s Foreign Exchange Policy Department.

A clear picture of the damage was not available immediately.

Abul Kalam Azad, a general manager of the central bank, told bdnews24.com that the fire "could not cause major damage as it was doused in a short period".

Fire Service Director General Ali Ahmad told the media in front of the building at around 11:30pm that 10 to 15 percent of the room was gutted.

"No computer server caught fire. But some files have been burnt," he added.

Asked whether the files included any important document, the Fire Service DG said, "The Bangladesh Bank officials are checking."

No casualties have been reported.

The authorities could not confirm what caused the fire.

Ali Ahmad said a UPS (uninterruptible power supply device) at the room might have caused the fire.

He said the Fire Service formed a five-member committee to investigate the incident.

Finance Minister AMA Muhith, BB Governor Fazle Kabir, and top officials of the central bank rushed to the building after hearing the news.

The finance minister left after the fire was doused, but the governor was still in the building at midnight, Ali Ahmad said.

State Minister for Finance Abdul Mannan also entered the building at around 11:45pm.

Md Shafiqul Islam, an executive director of the Bangladesh Bank, told the media after around another half an hour that central bank formed a three-member committee to assess the damage.

The committee, headed by another executive director, Ahmed Jamal, has been asked to submit the report within Mar 28.

State Minister for Finance Mannan has expressed ire over 'incidents' at the Bangladesh Bank, in a clear reference to the cyber theft of $81 million from the central bank's account at the Federal Reserve Bank of New York.

He says the government will investigate with importance why the central bank is experiencing incidents repeatedly.

Coming out of the building at midnight, he told the media that the central bank and the Fire Service launched separate investigations into the fire.

"But I will personally ask the finance minister to form a high-level technical committee," he told the media.

"There had been an incident here, and now another has occurred. Why those are happening repeatedly? We will check whether there is some internal affair behind those," he added.

In reply to a query, he said, "Of course, we have taken the matter very seriously. If we don't consider it seriously, the people will not accept it (the investigation)."

Hackers stole $81 million from Bangladesh Bank's account at the New York branch of the US central bank by sending fake orders through the SWIFT transaction system and transferred the money to and beyond the Philippines through its casinos in early February last year.

Bangladesh has retrieved a part of the stolen money from the Philippines. Investigations into the cyber theft, one of the biggest in banking history, are under way.