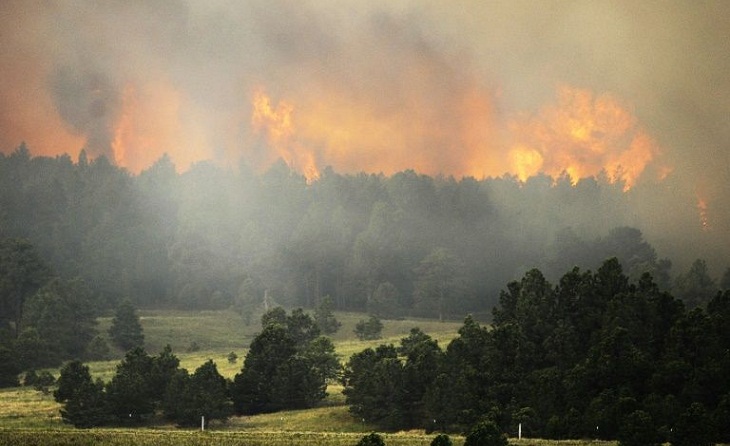 People sparked most US wildfires in recent decades, causing longer fire seasons and increasing the amount of scorched earth, according to a new study published Monday.

Researchers found that humans caused 84 percent or four out of five of the total 1.5 million wildfires studied between 1992 and 2012.

Lightning accounted for the rest.

In addition, human actions tripled the length of the fire season during those two decades and were responsible for 44 percent of the total acreage burned, researchers reported in Proceedings of the National Academy of Sciences.

"Humans are expanding fires into more locations and environmental conditions than lightning is able to reach," said Bethany Bradley at the University of Massachusetts Amherst, a co-leader of the study.

The spike in wildfires was aggravated by rising urbanization, they said.

And the potential threat was expected to get worse. Places where houses are intermingled with natural areas are expected to double by 2030 from the current nine percent of all US land area.

"Our results highlight the importance of considering where the ignitions that start wildfires come from, instead of focusing only on the fuel that carries fire or the weather that helps it spread," said co-lead author Jennifer Balch at the University of Colorado-Boulder.

"Thanks to people, the wildfire season is almost year-round."

The United States has suffered historically large wildfires in the past decade, especially in the western half of the country.

There is national concern about the duration and intensity of future wildfire seasons because of their potentially severe impact on agriculture,ecosystems, recreation and other economic sectors.

An additional worry is the high cost of putting out the blazes, which has topped $2 billion in recent years.

In the western state of Colorado, for example, 30 percent of wildfires between 1992 and 2012 were started by people and burned more than 1.2 million acres (nearly 486,000 hectares).

The duration of the US wildfires season sparked by human activity was 93 days, more than double the 43 days of the lightning-ignited fires, which tend to be concentrated during the summer months.

In the spring, autumn and winter seasons, humans added an average of 40,000 wildfires annually, more than 35 times the number of lightning-started fires in those seasons.

"We saw significant increases in the numbers of large, human-started fires over time, especially in the spring," said Bradley.

The potential for the blazes was being aggravated by climate change, the researchers said.

"Climate change is making our fields, forests and grasslands drier and
hotter for longer periods, creating a greater window of opportunity for human-related ignitions to start wildfires," said Balch.

John Abatzoglou, an associate professor of geography at the University of Idaho and a co-author of the paper, suggested the human factor offered hope of managing the threat.

"We can't easily control how dry fuels get, or lightning, but we do have some control over human-started ignitions," he said.

The researchers found one day in the 21-year period studied had the most number of human-started fires: 7,762. That was July 4, the country's Independence Day holiday, typically celebrated with fireworks.