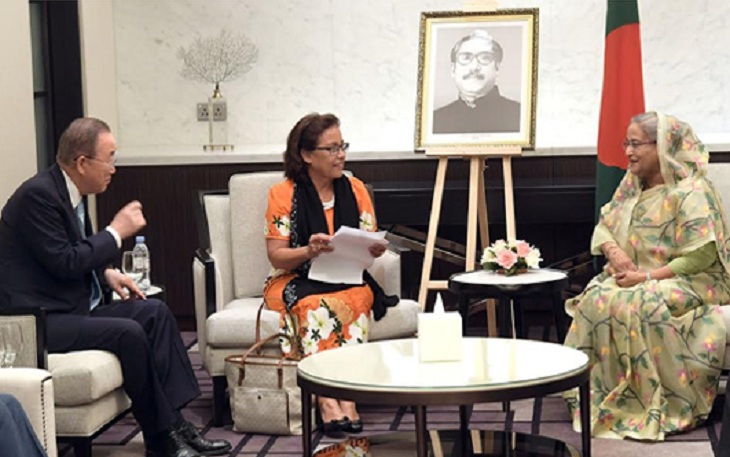 “I request all for their awareness and respective responsibility to fight the adverse impacts of climate change,” she said while inaugurating a two-day Dhaka Meeting of the Global Commission on Adaptation in a city hotel here.

The prime minister also urged the world community to put more emphasis on research and investment on this issue as the climate change is fast impacting on agriculture, life and livelihood.

Speaking on the occasion, the three dignitaries highly praised Prime Minister Sheikh Hasina for her extraordinary leadership to lead the world to address the adverse impacts of climate change from the fore front.

Hailing Bangladesh’s initiatives and strategies to fight the climate change impacts, Ban Ki-moon said “Of Course we are here to learn from Bangladesh.When comes to adaptation; Bangladesh is the best teacher to learn about adaptation.”

Wishing a complete success of the Dhaka Meeting of GCA, Prime Minister Sheikh Hasina said “This is a great opportunity for us to demonstrate our own strategies to adapt to climate change, build resilience as well as offer to share our knowledge and experience with you.”

“We are eagerly waiting to see the recommendations of the flagship report next September at the time of the climate change summit called by the secretary general of the United Nations where I, on behalf of Bangladesh and the Least Developed Countries (LDCs), have been invited to speak,” she said.

Bangladesh is expecting to take advantage of the best adaptation practices, most cost-effective solutions and risk reduction with the help of the Global Commission on Adaptation, she said.

The premier said that being a leading country of Adaptation, Bangladesh deserves to have a Regional Adaption Centre here.

Highlighting her government frantic efforts to effectively fight the climate change, she said “We are working relentlessly to overcome our vulnerabilities and create adaptation measures for the people. Over the last decade, we have spent on an average around US$ 1 billion annually for adapting to climate change impacts.”

Furthermore, to achieve climate resilience, the government created a dedicated Climate Change Trust Fund in 2009 and so far, more than US$ 420 million have been allocated from own resources to the fund for both adaptation and mitigation programs, she informed.

She said “Father of the Nation Bangabandhu Sheikh Mujibur Rahman showed the path of climate adaptation by building 172 Mujib Kellas (Cyclone Shelters) in the coastal areas”.

“We have taken initiatives to increase tree coverage from 22% to 24% in the next five years. So far Bangladesh has created 0.2 million hectares of coastal forests as shelterbelt to protect from tidal surges and calamities. Bangladesh is also successfully managing 601,700 hectares of Sundarbans Mangrove forest,” the premier said.