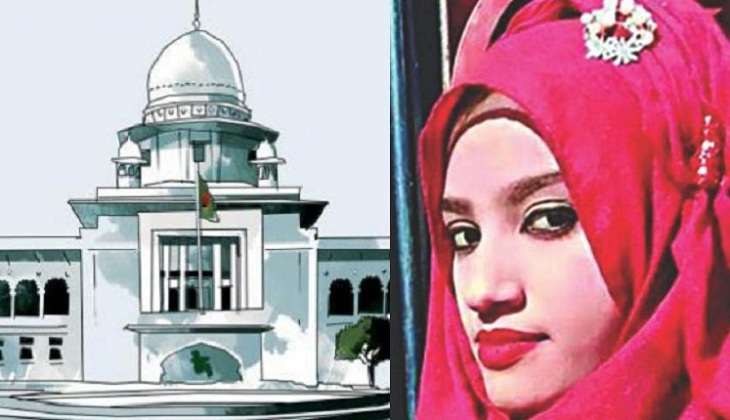 The High Court on Thursday said it would interfere if any negligence is found in the investigation into the killing of madrasa student Nusrat Jahan Rafi.

The HC bench of Justice Sheikh Hassan Arif and Justice Razik-Al-Jalil came up with the observations while Barrister Sayedul Haq Sumon, a Supreme Court lawyer, drew the attention of the court and demanded judicial investigation into the murder.

The court mentioned that Police Bureau of Investigation (PBI) is holding an inquiry into the incident and Prime Minister Sheikh Hasina herself was also concerned about the incident.
“Please keep faith on the investigation… We’ll interfere, if there is any negligence,” said the court.

All concerned should be careful so that the murder of Nusrat is not forgotten like the murders of journalist couple Sagar and Runi, Tonu and Mitu, it added.

Rafi, a student Sonagazi Senior Fazil Madras, was set afire during her examination allegedly by students loyal to Principal Sirajuddoula after he was arrested and subsequently suspended as Rafi had accused him of sexually harassing her.

She was immediately taken to the DMCH for better treatment where she underwent a surgery under life support on Tuesday.

Ten people, including the madrasa principal, have so far been arrested in this connection.

On April 8, in a declaration, Rafi told her doctors that four students wearing burqas and hand socks set her on fire. She identified one of them as Shampa.

On Wednesday, the case was transferred to the Police Bureau of Investigation.