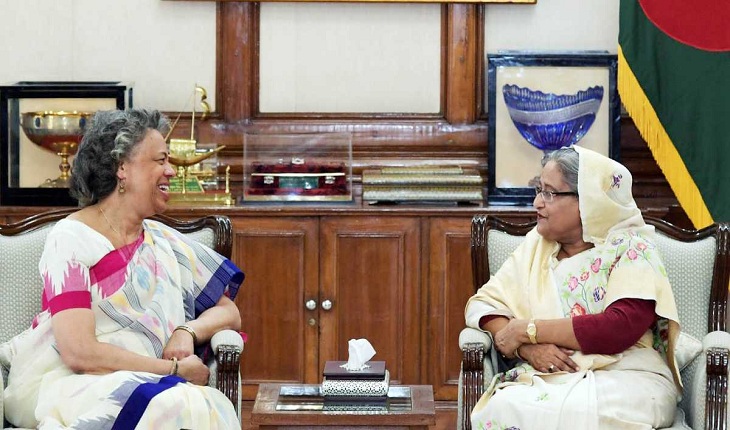 US ambassador in Dhaka Marcia Stephens Bloom Bernicat today said her country will continue support to Bangladesh’s development as she paid a farewell call on Prime Minister Sheikh Hasina.

“We’ll continue our support to Bangladesh’s uplift,” PM’s Press Secretary Ihsanul Karim quoted the US ambassador as saying while briefing reporters after the meeting at Ganabhaban here this morning.

He said the US envoy described Bangladesh’s young people as “extraordinary” expressing her firm belief that they will carry forward the country’s development.

She also highly praised the prime minister’s hard work to develop the country.

Terming education as very important for all, the ambassador said it is a “great factor” for development of any country.

Bernicat also appreciated mangoes and litchis that are produced in Bangladesh.

Highlighting her government’s tremendous successes in different sectors, the prime minister said her main motto is to develop the country and ensure welfare of the people.

From those experiences, Sheikh Hasina said, she planned how she will develop the country. “From that state, Bangladesh reached the present position,” she commented.

Mentioning her government’s steps for the development of the agriculture sector, the prime minister said previously vegetables were not available beyond the season.

“But we’re now getting vegetables round-the-year,” she said, adding, “It’s the contributions of our research and agri scientists.”