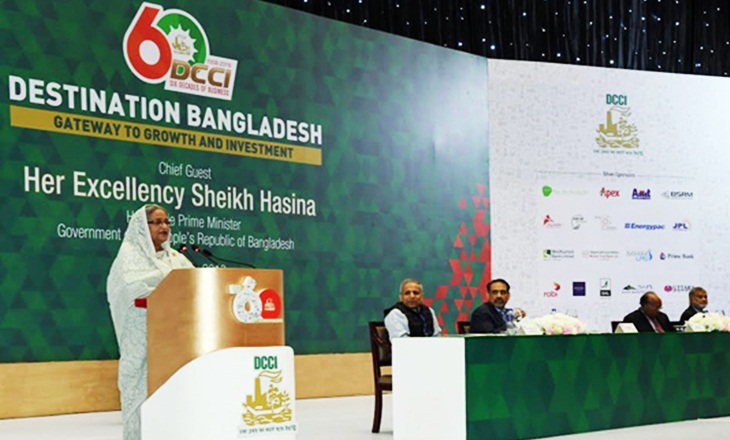 Prime Minister Sheikh Hasina on Sunday asked the business community to diversify their products and explore new markets in the world for their items availing of government support.

"We’ve to diversify our export products…you’ve to think how much varieties you can bring in your export basket," she said.

The Prime Minister said this while inaugurating the 'Destination Bangladesh: Gateway to growth and Development' organised by Dhaka Chamber of Commerce & Industry (DCCI) to celebrate its 60th years of founding at Bangabandhu International Conference Centre here.

Sheikh Hasina said the business community needs to come out from the traditional mindset of reaching only one or two destinations for their products. "Now markets are there in many countries. We’ve to look at those destinations, we have to find out which country wants what type of products, and we have to go for producing those items."

She said the industrialisation has to follow the demand of a certain area. "You have to look out for the products that produced in a particular area, and the demand of the product also has to be in the consideration."

Briefly describing various development activities of the government for advancing the country, Hasina said the country will be able to attain 8.25 percent GDP in the next fiscal. "We’ve fixed the target, our per capita income has increased along with the purchasing power," she said.

The Prime Minister urged the private sector entrepreneurs to play a bigger role in attaining the 8.25 GDP growth.

Mentioning the various steps taken in the last 10 years for the balanced development of the country, Hasina said her government does not think about the development of urban areas only.

Turning to the upcoming election, she said Bangladesh has the parliamentary system of democracy.  "Now, we’re in power…the election is coming, if the people of Bangladesh cast their votes for us we’ll be able to fulfil our unfinished development programmes, if they don’t ….”

Hasina said her efforts will be there to remain beside people. "What will happen after that I cannot tell you because our experience is bitter in the previous time," she said.

The Prime Minister said the private investors can come up with their investment individually or even under public-private partnership initiative or in any other form of approach.

About the role of the government, she said, the government would create opportunities for investment and doing business. “It’ll work as a facilitator through formulating necessary laws, policies and other basic rules to ensure a business-friendly environment.”

Hasina said the entrepreneurs will do their business through establishing industries and creating employment opportunities for people.

To make that happen, Hasina said, special importance has been given towards industrialising the country instead of depending on an agriculture-based economy.

The Prime Minister urged the business leaders to prepare and submit specific recommendations keeping in mind the emerging economic potentials of Bangladesh.

At the programme, the Prime Minister was honoured with the Visionary Leadership Awards for her contributions to developing the country, particularly promoting the private sector.

No plan to shut down Tejgaon Airport: PM