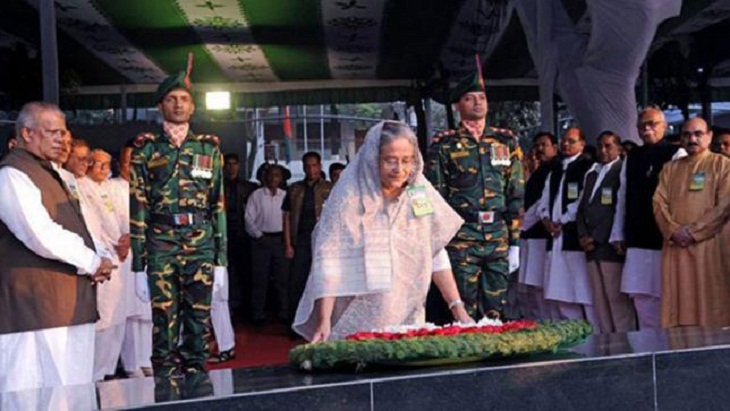 The premier paid the homage by placing a wreath at Bangabandhu's portrait in front of Bangabandhu Memorial Museum at Dhanmondi in the city this morning.

After laying the wreath, the prime minister stood in solemn silence for some time as a mark of profound respect to the memory of Bangabandhu, the architect of independence.

Flanked by central leaders of the party, Sheikh Hasina, also the president of Bangladesh Awami League, placed another wreath at the portrait of Bangabandhu on behalf of her party.

On this day in 1971, Bangladesh's first government in exile was formed at the Baidyanathtala mango grove in Meherpur (the then Kushtia district).

The place was later renamed Mujibnagar to Bangabandhu who had been declared as the president of the government-in-exile.

Syed Nazrul Islam was appointed the acting president in the absence of Bangabandhu. Tajuddin Ahmad was appointed the first prime minister, while Captain M Mansur Ali and AHM Quamaruzzaman were made cabinet members.

The successful leadership of the core cabinet steered the Liberation War to the victory on December 16 that year.