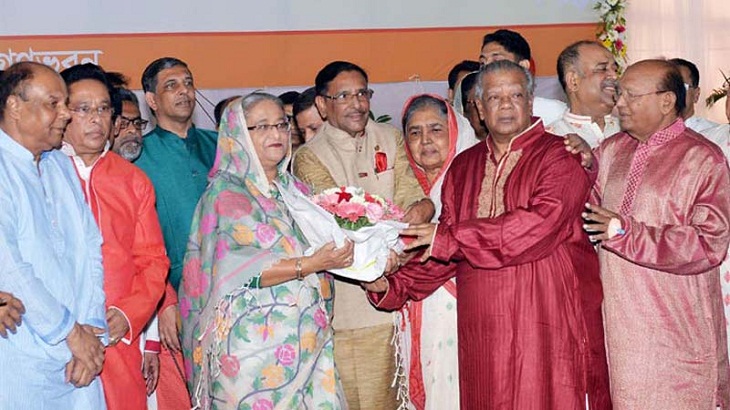 Prime Minister Sheikh Hasina yesterday expressed her firm optimism that Bangladesh would advance further and the countrymen would get a beautiful life in Bangla Nababarsha.

"Bangladesh would move ahead further in Bangla Nababarsha by clearing all 'janjal' (rubbishes) of the past year and the people of the country would live in 'anandaloke' (utopia) by getting a beautiful life Insha Allah," she hoped.

The prime minister expressed the optimism while exchanging Bangla Nababarsha 1424 greetings with a cross section of people including leaders and workers of her party at the Ganabhaban lawn here this morning.

Sheikh Hasina, also the Awami League president, reiterated her determination to build a hunger and poverty-free Sonar Bangla as dreamt by Father of the Nation Bangabandhu Sheikh Mujibur Rahman. "We have firm belief that we could achieve the goal," she said.

At the outset of her speech, the premier extended her Nababarsha greeting to the countrymen and expatriates Bangladeshis.

She also thanked the artistes who performed cultural function at Ganabhaban yesterday on the occasion of Bangla Nababarsha. "The Nababarsha function got a new dimension through it," she said.

Earlier, on her arrival at the venue at about 10.30 am, the prime minister was greeted with bouquets by the central leaders of Bangladesh Awami League. At the time Rabindranath Tagore's famous Baishakhi song "Esho He Baishakh Esho Esho" was sung by artistes Subir Nandi, Lily Islam, Shama Rahman and others.

On the occasion, the guests were entertained with traditional Bangalee foods like moa, murki, muroli, kadma, zilapi, and other kinds of sweetmeats.