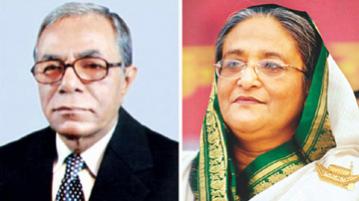 In separate messages on the eve of Pahela Boishakh- 1424, they wished peace, happiness and prosperity of the people and the country in the New Year.

The President, in his message, said Bangla Nababarsha is a universal and non- communal cultural festival of the Bengali nation for long.

The root of self identity, emergence and flourishing of national entity of the Bengali nation are entrusted in the festival, he said.

Abdul Hamid said the Mangol Shovajatra of Pohela Boishakh has earned the recognition of UNESCO in 2016, which enhanced the dignity of the Bengali nation in the world.

"Bengali culture of thousand of years is imbued with non-communal spirit where there is no place of fundamentalism, militancy or terrorism," he said.

The president said before the independence, attacks came on the culture and non-communal spirit of the nation repeatedly and foreign cultures were imposed to divert the language and culture in different directions but the Bengali nation never accepted those.

So, Pohela Boishakh appears every year with a strong force to flourish the Bengali culture and the national entity, he added.

He hoped the Bangla New Year 1424 will bring harmony and prosperity taking away all sorrows and illness.

In her message, Prime Minister Sheikh Hasina said the nation starts the first day of Bengali New Year with the hope of progress of life forgetting all shortcomings and sorrows.

She said Bangla New Year appears particularity centering the rural life as halkhata and village fair were main attractions once.

The Prime Minister said the rural Boishakhi festival has entered into city life in course of time and now all towns of the country wear a festive mood marking the Pohela Boishakh.

Sheikh Hasina said the inception of Mangol Shovajatra added a new dimension to the Pohela Boishakh celebration in Dhaka in the 80's which was placed in the list of UNESCO culture heritages on November 30 last year.

Marking the Pohela Boishakh, business of new dresses, sweets and a variety of food items and halkhata festival have been contributing to the economy side by side with bringing entertainments.

She said Bangla New Year celebration and Bengali nationalism is interlinked as the nation upholds the festival as part of culture and living.

"We are heading towards progressiveness and prosperity imbued with the spirit of Bengali nationalism. Bangladesh has now become a 'role model' in socio-economic development," she said, adding the country made immense successes in the outgoing year in national and international arena.

The Prime Minster also wished that the Bengali New Year 1424 would bring happiness, peace and progress for the country.