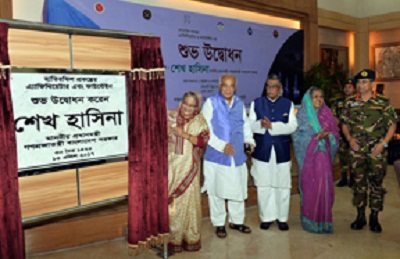 Prime Minister Sheikh Hasina today inaugurated the "grand musical dancing fountain" and amphitheater at Hatirjheel, a popular recreational spot of Dhaka, describing the twin establishments as Bangla Nababarsha 1424 gifts to the city dwellers and the countrymen.

The amphitheater and the largest musical dancing fountain in South Asia, with capacity of 2000 audience, have been constructed on the water of Hatirjheel lake to give a new facelift to the Hatirjheel project.

Inaugurating the two establishments through videoconferencing from Ganabhaban, the prime minister urged the people to keep the project area neat and clean. "I would like to request the people who would visit the area not to throw wastes like empty water bottles, papers into the water of the lake," she said.

Sheikh Hasina said a huge number of city dwellers alongside local and foreign tourists would be able to enjoy the beauty of the fountain in an unique environment after visiting the Hatirjheel site.

Narrating attractive features of amphitheatre, the project director said the amphitheatre would be looking like flower with petals due to its eye- catching construction technic, circular structure and very beautiful colour design.

Besides, a 120-meter-long colourful fountain has also been constructed there and such a structure would create an environment of floating stage on the water in the minds of the audience.

This colorful fountain has time-controlled sound wave and musical track which created a tridimensional structure.

The Hatirjheel project has been implemented from the Bengunbari Khal, southern part of the Hotel Sonargaon, and at the middle point of Rampura Bridge after going through Tongi Diversion Road.

Besides, two water taxi terminals and four deep tube wells were also set up under the Hatirjheel project.