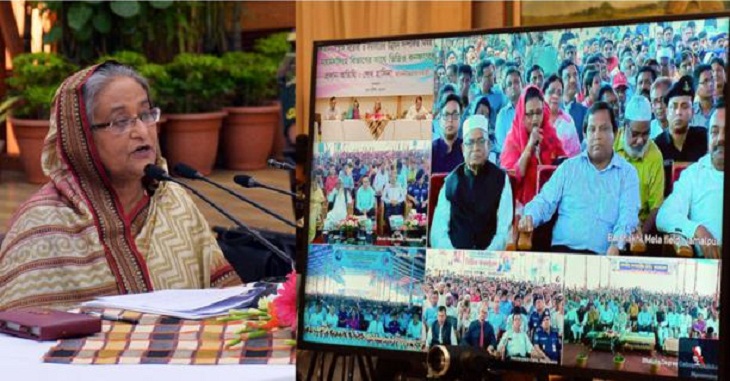 "The goal ahead of us is to expedite the country's development through implementing various development initiatives by curbing terrorism and militancy, and we seek your cooperation in materialising this goal," she said.

The prime minister said this during a videoconference at her official residence Gono Bhaban in Dhaka with local administration, public representatives and people from all strata of four districts under Mymensingh division.

The videoconference was arranged aiming to bolster her stance against terrorism and militancy, and highlight the various development initiatives of her government.

The PM's videoconference, connected to 4019 points of Mymensingh, Netrakona, Jamalpur and Sherpur, reached out to some 28 lakh people.

Expressing her firm resolve that Bangladesh is marching forward and will continue to move ahead, Hasina sought the cooperation of all in turning Bangladesh into a mid-income country by 2021 and a prosperous one by 2041.

Meanwhile, an eye-catching amphitheatre and a grand musical dancing fountain, set up at the city's Hatirjheel Lake to attract more visitors and tourists, have been opened as Pahela Baishakh gifts for the city dwellers.

The prime minister inaugurated those under a Rajuk project titled 'Integrated Development of Hatirjheel area including Begunbari Canal' through a videoconference from her official residence.

Special Works Organisation of Bangladesh Army implemented the project in collaboration with the Ministry of Housing and Public Works, Rajuk and Dhaka Wasa.

These are Pahela Baishakh gifts for people, she says

Speaking on the occasion, the prime minister said the newly-constructed architectural establishments the Amphitheatre and the musical fountain are Pahela Baishakh gifts for the city dwellers and the country's people.

She urged the city dwellers and visitors not to dump wastes like water bottles, used papers and other materials into the water of the Hatirjheel lake.

"Everyone should be much more responsible in maintaining the beauty of the site and its establishments."

Hasina also reiterated her call to people to stay careful so that no one can spread any confusion about Pahela Baishakh celebrations. "Religion has no relation and conflict with the celebration of the Bengali New Year."

About Hatirjheel, she said, "The Amphitheater and the fountain have created a further scope for the busy city dwellers to enjoy a quality time in a very spectacular environment of the gorgeous spot."

The prime minister said her government does not want to confine the city dwellers to a city of bricks, stones and concrete. "Rather, we want to ensure the overall development of the city through maintaining natural balance."

Describing Hatirjheel as one of the government's priority projects, Hasina said the fountain and the Amphitheatre have the capacity to accommodate 2,000 visitors.

Narrating attractive features of the Amphitheatre, Hasina said the Amphitheatre will look like a flower with petals for its elegant construction technique, circular structure and very beautiful colour design.

Besides, a 120-meter long colourful fountain has also been constructed there with time-controlled sound wave and musical track, turning it into a tri-dimensional structure. "Such a structure will create an environment of a floating stage on the water in the minds of the audience."

Hasina said the residents of Gulshan-Banani, Mohakhali, Rampura, Malibagh, Banasri, Merul-Badda, Moghbazar, Eskaton, Karwan Bazar and Tejgaon Industrial areas are getting special facilities for their movement as the project has been implemented.

She hoped that the Hatirjheel project will also play a significant role in making Dhaka as a livable city and attract foreign tourists. "Hatirjheel area will turn into an eye-catching tourist spot."

Besides, the prime minister said four bridges, three viaducts, four overpasses, 8.80 kilometers of footpaths, 9.80 kilometers of walkway, one Children park, 13 viewing decks will be constructed under the project. "Two water taxi terminals and four deep-tube wells were also set up under the Hatirjheel project."

The prime minister said her government has been working to ensure people's basic needs like food, education, housing and Medicare as well as recreation facilities.