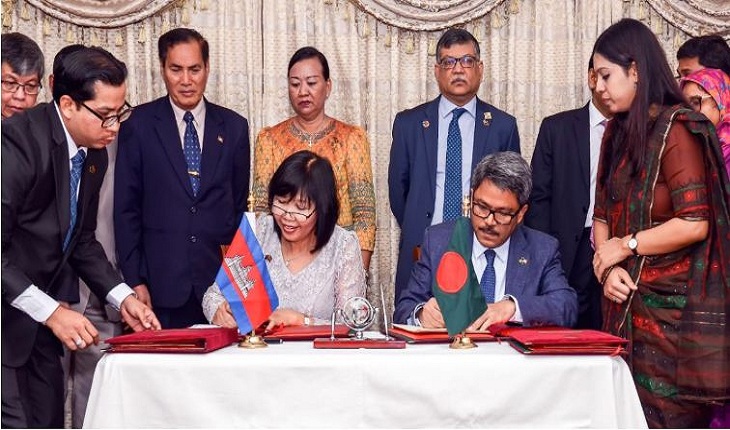 Cambodia has assured Bangladesh of its support within the framework of Asean as Dhaka sought Phnom Penh’s support for safe repatriation of Rohingyas to their place of origin in Rakhine State.

The Rohingya issue was discussed at the first-ever Joint Commission (JC) meeting between Bangladesh and Cambodia held at State guesthouse Meghna in the city on Thursday.

“Myanmar is a member of Asean. Cambodia is also an active member and will enhance its talks with Myanmar using Asean platform for quick repatriation of Rohingyas. As a common friend of Bangladesh and Myanmar, they’ll play their role in the future,” State Minister for Foreign Affairs Md Shahriar Alam told reporters at a joint briefing after the meeting.

He said Bangladesh side raised the issue of trust deficit and laid emphasis on confidence-building measures creating congenial and peaceful environment in Rakhine.

Bangladesh side proposed using the Asean platform taking the civil society and political leadership which Cambodia assured of considering it “actively”.

State Minister Alam led an 18-member Bangladesh delegation at the JC meeting while from the Cambodian side a 27-member delegation was led by Secretary of State of the Ministry of Foreign Affairs and International Cooperation Eat Sophea.

The Cambodian side was highly appreciative of the government of Bangladesh for providing shelter to the persecuted people from Rakhine State.

They hoped that Bangladesh’s bilateral consultations with Myanmar would lead an early solution to the problem.

The MoU establishing the JC framework was signed in Dhaka in June 2014 during the visit of the Cambodian Prime Minister Hun Sen, said the Ministry of Foreign Affairs.

Both sides stressed expanding bilateral trade and investment and sharing each other’s practices and strategies in implementing the Sustainable Development Goals (SDGs).

The two sides agreed that the Technical Working Group Meeting on training cooperation will be held in Dhaka soon.

To implement the MoU on tourism both sides decided to convene the first meeting of the Joint Working Group in Cambodia soon.

Both sides underscored the importance of direct air connectivity and stressed the need for early signing of the Air Services Agreement.

Bangladesh handed over to the Cambodian side a three-year Cultural Exchange Programme (CEP) to celebrate the Mujib Year jointly in both countries.

It was agreed that the Liberation War Museum of Bangladesh and the Toul Sleng Genocide Museum of Cambodia would share best practices through arrangement of joint seminar and sharing of best practices.

Both sides welcomed the finalization of the proposed MoU on Defence Cooperation under which members of armed forces of both countries would take part in various training and capacity building programmes in both countries.

It was agreed that parliamentarians of two countries would take part in exchange programmes under the framework of the Bangladesh-Cambodia Parliamentary Friendship Group.

At the meeting an MoU on establishment of Foreign Office Consultations was also signed.

PM visits CMH to have last glimpses of Ambassador Ali