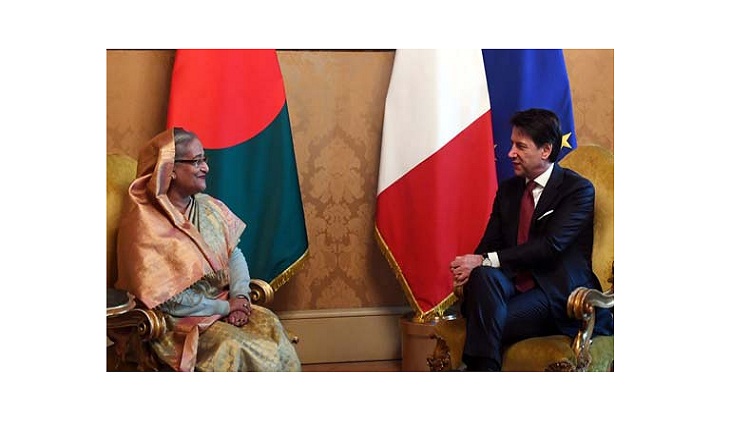 At the meeting, Italy also pledged to provide one million Euros for the help of the Rohingyas in addition to the existing assistance.

“Both the prime ministers stressed the need for enhancing cooperation in different fields for mutual benefits of the two countries,” PM’s Press Secretary Ihsanul Karim told reporters after the talks at Palazzo Chigi, the official residence of the Italian prime minister.

Nearly one hour talks, he said, the two premiers discussed the entire gamut of bilateral relations and both of them expressed satisfaction at the present state of economic cooperation between the two countries.

The Italian prime minister described his talks with Bangladesh Premier Sheikh Hasina as “fruitful” and said it is the beginning of another new chapter in their relations with Dhaka.

“I appreciate your ‘super humanitarian’ endeavours in hosting over 1.1 million Rohingya nationals in Bangladesh,” the press secretary quoted the Italian premier as saying.

In this connection, the Italian prime minister said in addition to the existing assistance, his country will provide one million Euros for the help of the Rohingya citizens through the UNHCR.

The press secretary said the Bangladesh prime minister urged the international community including Italy to ensure so that Myanmar obeys the instructions of the International Court of Justice on the Rohingya issue.

Terming Italy as a great friend of Bangladesh, the Bangladesh prime minister recalled that Italy was the first few European countries to recognise Bangladesh immediately after independence.

Regarding her visit to Italy, Sheikh Hasina hoped that due to this visit the bilateral relations will reach a greater height.