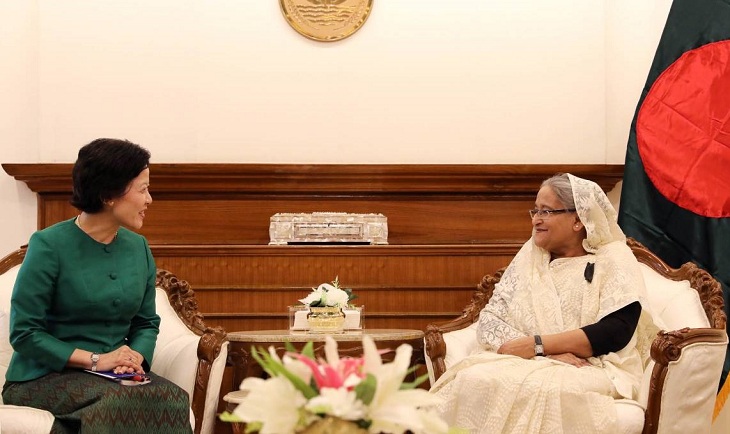 Thailand says it will continue its support to Bangladesh for the swift repatriation of Rohingya refugees.

Newly-appointed Thai Ambassador Arunrung Phothong Humphreys conveyed this message when she called on Prime Minister Sheikh Hasina at her office on Wednesday.

He said Prime Minister Hasina termed Rohingyas as “the big burden” for Bangladesh. “They’re citizens of Myanmar [and] must return to their homeland,” she said.

Bangladesh is currently hosting more than 1.1 million forcibly displaced Myanmar nationals.
Most of them came here after the Myanmar army launched a brutal offensive targeting the ethnic minority. Myanmar denies them citizenship and calls them ‘Bangali’ to imply that they are illegal immigrant from Bangladesh.

Two attempts to repatriate the Rohingyas have failed.

Humphreys said she is committed to take Bangladesh-Thailand bilateral relations to a new height.

“The 40 years relations between the two countries are very friendly and cordial,” she said, mentioning that Thailand is interested to work with Bangladesh in trade, industry and energy sectors.

She highly praised Bangladesh’s growth, particularly its high GDP growth, saying: “It became possible because of the leadership and guidance of Prime Minister Sheikh Hasina.”

Humphreys mentioned that Bangkok University has introduced the Bangabandhu Chair.

She noted that Bangladesh is located at a very strategic position in South Asia. “Bangladesh is the gateway to South Asia for those who will come from the East. It’s now a very important country in the regional and international forum,” she said.

Prime Minister Hasina assured all out cooperation to the Ambassador in discharging her duties in Bangladesh. She expressed deep satisfaction at the present state of bilateral relations of the two countries.

Sheikh Hasina noted that Thailand has developed in agricultural sector especially in the food processing sector and the country could cooperate with Bangladesh in the sector.

“Our aim is to eradicate poverty and ensure basic needs of the people. Dream of the father of the nation was to build the country in a planned way,” she said.

In this connection, she said the center of the development activities of the government is the rural people. The Prime Minister noted that the poverty level has come down to 21.4 percent while per capita income rose to $1,909.

She also emphasised on rail, road and air connectivity.

Talking about the security issue, she said the government took the policy of zero tolerance towards terrorism. She also said Bangladesh gives importance to the South East Asian countries, especially for trade and business.