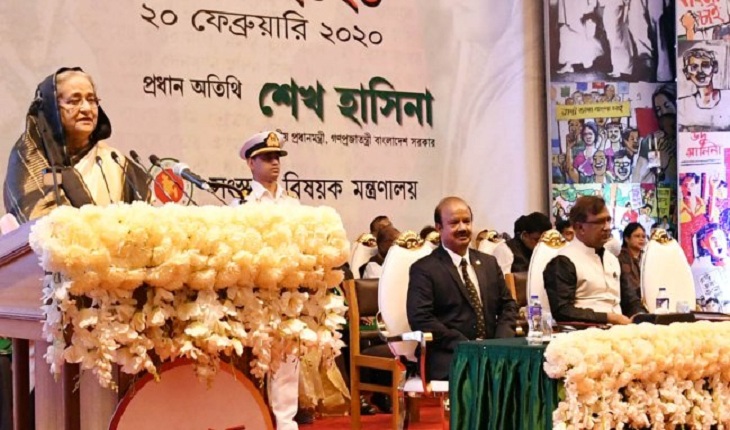 “We’re Bengalis. Our cultural practice will also continue. We’ve to pay special attention so that our literature and culture will be spread further in the international stage,” she said.

The Prime Minister said this while distributing the Ekushey Padak-2020, the second highest civilian award, at a ceremony organised by the Cultural Affairs Ministry at the Osmani Memorial Auditorium in the city.

Sheikh Hasina said though there is need to learn other language, the own language (mother tongue) should not be forgotten. Many people are to stay abroad for many reasons, but they will always have to respect the mother tongue, she said.

“Ekush (February 21) taught us not to bow down. Ekush taught us the sense of self-esteem,” she said.

Noting that the bloodshed on February 21, 1952 paved the way for independence in 1971, she said, “Ekush is very glorious day for us. We want our next generations to know this glorious history,” she said.

The Prime Minister said her government wants Bangladesh to be built as a developed and prosperous Sonar Bangla. “We’re Bengalis. We, being Bengalis, will move ahead raising our heads in the world arena,” she said.

The Prime Minister distributed the prestigious award among 20 eminent personalities and an organisation in recognition of their contributions to various fields.

Aminul Islam Badsha (posthumous) was given the award for his role in the Language Movement.

Prof Dr Shamsul Alam and Sufi Mohammad Mizanur Rahman got the award for making contributions to economy and social service respectively, while Dr Nurun Nabi, Sikder Aminul Haque (posthumous) and Nazmun Nesa Piari for their contribution to language and literature, and Prof Dr Sayeba Akhter for contribution to the medical science.

Each recipient will get a gold medal, a certificate and a cheque for Tk 2 lakh.

On February 5, the Cultural Affairs Ministry announced the names of the recipients of the ‘Ekushey Award’ introduced in memory of the martyrs of the Language Movement of 1952.