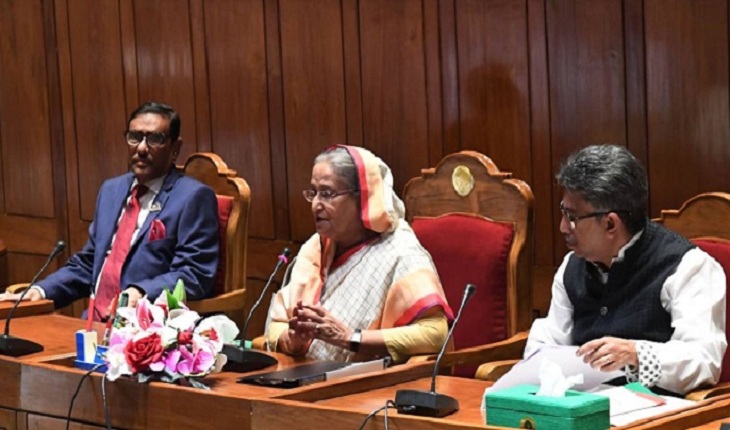 Prime minister Sheikh Hasina on Tuesday asked her party leaders and activists not to do excesses while observing ‘Mujib Borsho’.

The Prime Minister also asked the party followers not to install any mural of Bangabandhu without the approval of the Bangabandhu Memorial Trust.

She made the directives while speaking at a meeting of the Awami League Parliamentary Party (ALPP) at Jatiya Sangsad Bhaban.

“Don’t do excesses and don’t be overactive while observing Mujib Borsho,” the Prime Minister was quoted as saying by an MP who was present at the meeting.

Hasina said she went through terrible days after the killing of Bangabandhu.

"We know the role of many during his [Bangabandhu’s] assassination. So, don’t set up any mural of Bangabandhu without the permission of the Bangabandhu Memorial Trust,” she said.

The MP said the Prime Minister expressed dissatisfaction over some of the party senior MPs who usually sit beside her in the House as they were absent during parliament sessions.

The PM even said that the sitting arrangement of those MPs will be rearranged far away from her in the House if they do not join sessions regularly.